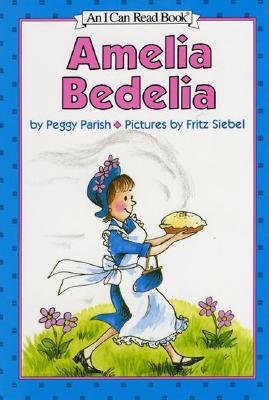 Learn to read with the classic Amelia Bedelia! Ever since Amelia Bedelia made her debut in 1963, young readers have been laughing out loud at the antics of this literal-minded but charming housekeeper.

From dressing the chicken to drawing the drapes, Amelia Bedelia merrily does exactly what Mr. and Mrs. Rogers tell her to do. But even when things get a bit mixed up in the process, Amelia Bedelia always finds a way to make everything turn out perfectly in the end.

Peggy Parish's beloved classic is a Level Two I Can Read book, geared for kids who read on their own but still need a little help. Through Amelia Bedelia's hilarious adventures, kids learn the difference between literal and nonliteral language and begin to grasp wordplay. Whether shared at home or in a classroom, the engaging stories, longer sentences, and language play of Level Two books are proven to help kids take their next steps toward reading success.

Peggy Parish was born and grew up in Manning, South Carolina. Before moving to New York City, she taught school in the Panhandle country and in coal-mining areas. Her first job in New York City was with the Girl Scouts, and she now teaches the third grade at the Dalton School in Manhattan. Miss Parish is the author of several other books for children, including the popular Let's Be Indians.

Fritz Siebel was born in Vienna and now lives in New York City with his family. He is well known for his pictures in Cat and Dog; David and the Giant; and Tell Me Some More . . . , all Harper I Can Read Books. Among the other books he has illustrated are A Fly Went By and Who Took the Farmer's Hat?

“Right on the button for juvenile humor! This book is for that stage in life when the acme of wit is considered to be a questions like this—‘How can I sit UP when I’m sitting DOWN?’ A perfect blend of text and pictures spiced with humor.”
— K.

“The hilarious antics of a housekeeper whose literal interpretations of her list of chores lead to some extremely funny messes.”
— School Library Journal

“The new maid, Amelia Bedelia, was so eager to please that she followed her instructions to the letter with the kind of silly results that will make kindergarten children giggle.”
— Publishers Weekly

“The younger children for whom this nonsense makes a good read-aloud, and those older who will find it easy to read, will giggle through its series of jokes.”
— Horn Book Magazine

“Amelia Bedelia, the new maid, slightly suggests the famous Mary Poppins, but she makes her entry discreetly through the doorway, on her two feet, instead of blowing in on the wind. This is purely a ‘silly’ book, with no lesson to impart, but it will seem hilarious to young children.”
— Saturday Review