The Ministry of Pain: A Novel (Paperback) 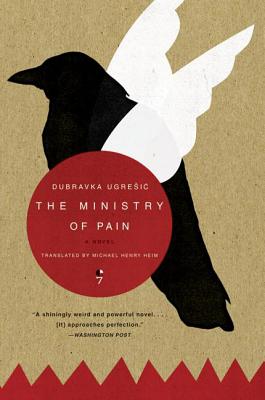 Having fled the violent breakup of Yugoslavia, Tanja Lucic is now a professor of literature at the University of Amsterdam, where she teaches a class filled with other young Yugoslav exiles, most of whom earn meager wages assembling leather and rubber S&M clothing at a sweatshop they call the "Ministry." Abandoning literature, Tanja encourages her students to indulge their "Yugonostalgia" in essays about their personal experiences during their homeland's cultural and physical disintegration. But Tanja's act of academic rebellion incites the rage of one renegade member of her class—and pulls her dangerously close to another—which, in turn, exacerbates the tensions of a life in exile that has now begun to spiral seriously out of control.

An acclaimed novelist and essayist, Dubravka Ugresic is a native of the former Yugoslavia who left her homeland in 1993 for political reasons. She now lives in Amsterdam.

“Soulful, often searing...This is a work that comes from the gut, one that deserves to be read.” — New York Times Book Review

“[A] powerful novel of ideas.” — Time Out New York

“This edgy, extraordinary novel . . . offers universal insights into what it is like to lose home, nationality and language.” — The Sunday Times (London)

“[The Ministry of Pain] is a disturbing read that should have you in its thrall.” — The Times (London)

“Splendidly ambitious...She is a writer to follow. A writer to be cherished.” — Susan Sontag

“Ugresic must be numbered among what Jacques Maritain called the dreamers of the true; she draws us into the dream.” — New York Times

“Like Nabokov, Ugresic affirms our ability to remember as a source for saving our moral and compassionate identity.” — Washington Post

“Ugresic’s books contain some of the most profound reflections on culture, memory and madness you will ever read.” — The Independent

“Ugresic’s cunning, subtle technique is at its most powerful here.” — The Independent (London)

“The Ministry of Pain is a shiningly weird and powerful novel...[it] approaches perfection.” — Washington Post

“The Ministry of Pain is a masterly novel.” — Harper's Magazine