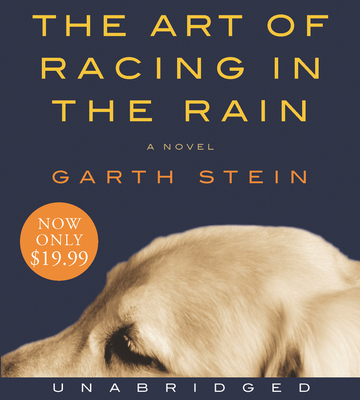 By Garth Stein, Christopher Evan Welch (Read by)
$19.99
Email or call for price

“Sometimes, if you are very lucky, fate gives you a special friend. Denny's friend Enzo will stand by him through some of the best and worst times of his life, his faith in Denny bone deep. Enzo is a dog, a dog with a very old soul. Denny is a race driver with natural talent, but sometimes life gets in the way of natural talent, and the road can have sharp bends. Suffused with humor, love, pain, and valor, this should be one of the year's best books!”
— Deon Stonehouse, Sunriver Books, Sunriver, OR

The New York Times bestselling novel from Garth Stein–a heart-wrenching but deeply funny and ultimately uplifting story of a dog’s efforts to hold together his family in the face of a divisive custody battle.

Enzo knows he is different from other dogs: a philosopher with a nearly human soul (and an obsession with opposable thumbs), he has educated himself by watching television extensively, and by listening very closely to the words of his master, Denny Swift, an up-and-coming race car driver.

Through Denny, Enzo has gained tremendous insight into the human condition, and he sees that life, like racing, isn't simply about going fast. Using the techniques needed on the race track, one can successfully navigate all of life's ordeals.

On the eve of his death, Enzo takes stock of his life, recalling all that he and his family have been through: the sacrifices Denny has made to succeed professionally; the unexpected loss of Eve, Denny's wife; the three-year battle over their daughter, Zoë, whose maternal grandparents pulled every string to gain custody. In the end, despite what he sees as his own limitations, Enzo comes through heroically to preserve the Swift family, holding in his heart the dream that Denny will become a racing champion with Zoë at his side. Having learned what it takes to be a compassionate and successful person, the wise canine can barely wait until his next lifetime, when he is sure he will return as a man.

Garth Stein is the author of Enzo Races in the Rain!, based on the New York Times bestselling novel The Art of Racing in the Rain (and its tween adaptation, Racing in the Rain). His other works include A Sudden Light, How Evan Broke His Head and Other Secrets, Raven Stole the Moon, and a play, Brother Jones. He is the cofounder of Seattle7Writers.org, a nonprofit collective of sixty-two Northwest authors dedicated to fostering a passion for the written word. Garth lives in Seattle with his family and his dog, Comet.