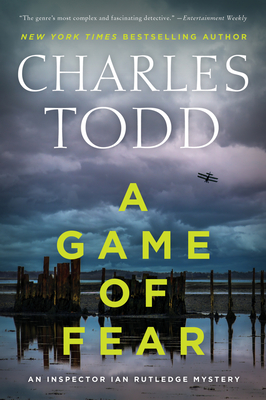 This is book number 24 in the Inspector Ian Rutledge Mysteries series.

In this newest installment of the acclaimed New York Times bestselling series, Scotland Yard’s Ian Rutledge is faced with his most perplexing case yet: a murder with no body, and a killer who can only be a ghost.

Spring, 1921. Scotland Yard sends Inspector Ian Rutledge to the sea-battered village of Walmer on the coast of Essex, where amongst the salt flats and a military airfield lies Benton Abbey, a grand manor with a storied past. The lady of the house may prove his most bewildering witness yet. She claims she saw a violent murder—but there is no body, no blood. She also insists she recognized the killer: Captain Nelson. Only it could not have been Nelson because he died during the war.

Everyone in the village believes that Lady Benton’s losses have turned her mind—she is, after all, a grieving widow and mother—but the woman Rutledge interviews is rational and self-possessed. And then there is Captain Nelson: what really happened to him in the war? The more Rutledge delves into this baffling case, the more suspicious tragedies he uncovers. The Abbey and the airfield hold their secrets tightly. Until Rutledge arrives, and a new trail of death follows…

“Excellent…Todd has rarely been better at creating a creepy atmosphere to enhance [a] nuanced exploration of human darkness. Rutledge remains one of today’s most fully rounded mystery leads.” — Publishers Weekly (starred review)

"A Game of Fear continues the high standards readers have come to expect from Todd. It is a testament to both authors’ considerable talents, and a wonderful tribute to the late Caroline Todd.” — South Florida Sun-Sentinel

“[A Game of Fear] continues the adventures of one of the more complicated and unique protagonists in a series you will ever find, which makes for a rich blend of history and intrigue."   — Book Reporter

“A superior example of crime fiction, a haunting exploration of war and its legacies and a sterling reaffirmation of its authors’ humanity, A Game of Fear offers escapist pleasures—including a breathless climax—while simultaneously eliciting thought on intellectual and moral issues.”   —  Fredericksburg Freelance-Star

“The novel is written with a gentle familiarity, drawing the reader in to a detailed portrayal of characters with their own needs and personal history in habiting a world that recent literature has brought into focus for the 21st century reader. Recommended.” — Historical Novel Society

“Each of Charles Todd’s engrossing novels about Scotland Yard Insp. Ian Rutledge, set post-World War I, puts a spotlight on often forgotten details about the Great War. It’s this minutia that illustrate the war’s effect on the characters and the region . . . Charles Todd are experts at subtly drawing parallels to 21st century concerns. The Great War ended more than a century ago but Ian’s personal issues and his investigations are relevant today.” — Florida Sun Sentinel on A Fatal Lie

“A Fatal Lie provides an excellent book with which to walk into Rutledge’s pursuit of crime and determination to make things right . . . Those who value similar portrayals of place as character—as in Louise Penny’s Three Pines, for instance—will treasure A Fatal Lie and its Welsh backdrop. As a police procedural, also, the book’s persistent untangling of motive, means, and opportunity provides an instant classic for this mystery genre, along with an intriguing exploration of the heart’s effects on the mind.” — New York Journal of Books

“Fans of the series will want Todd’s latest historical mystery.” — Library Journal on A Fatal Lie

“[A] very captivating and page-turning mystery.” — Fresh Fiction on A Fatal Lie

“This is the type of classic-style mystery that we have grown to love from Charles Todd, and it never fails to deliver.” — BookReporter.com on A Fatal Lie

"This is a series, written by a mother-and-son team under the Charles Todd pseudonym, that shows no signs of slowing down. As always, this one combines crisp plotting with stylish prose. Ideal for historical-mystery devotees." — Booklist on A Divided Loyalty

“Todd once and for all establishes the shell-shocked Rutledge as the genre’s most complex and fascinating detective.” — Entertainment Weekly

“It is an intense ride to take . . . but one that is well worth it.” — Book Reporter on A Divided Loyalty

“Ian’s resilience and his complex persona continue to make him an endearing character. And Todd, the mother-and-son writing team of Caroline and Charles Todd, continue their superior storytelling.” — Florida Sun Sentinel on A Divided Loyalty

“The investigation and its ultimate destination are gripping.” — Kirkus Reviews on The Black Ascot

"The melancholy tone that distinguishes the Rutledge series is a reminder that war never ends for the families and friends of lost loved ones. It just retreats into the shadows.” — New York Times Book Review

“Their ability to make a century-old time and place feel as real as today is beautifully showcased in the latest Rutledge novel, and series fans should not miss it.” — Booklist