Black Holes: The Key to Understanding the Universe (Hardcover) 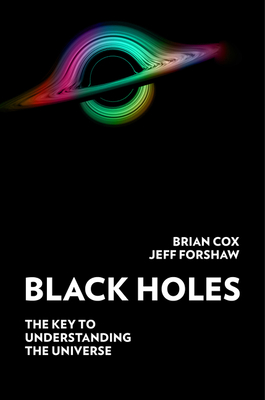 By the star physicist and author of multiple #1 Sunday Times bestsellers, a major and definitive narrative work on black holes and how they can help us understand the universe.

At the heart of our galaxy lies a monster so deadly it can bend space, throwing vast jets of radiation millions of light years out into the cosmos. Its kind were the very first inhabitants of the universe, the black holes.

Today, across the universe, at the heart of every galaxy, and dotted throughout, mature black holes are creating chaos. And in a quiet part of the universe, the Swift satellite has picked up evidence of a gruesome death caused by one of these dark powers. High energy X-ray flares shooting out from deep within the Draco constellation are thought to be the dying cries of a white dwarf star being ripped apart by the intense tides of a supermassive black hole – heating it to millions of degrees as it is shredded at the event horizon.

They have the power to wipe out any of the universe’s other inhabitants, but no one has ever seen a black hole itself die. But 1.8 billion light years away, the LIGO instruments have recently detected something that could be the closest a black hole gets to death. Gravitational waves given off as two enormous black holes merge together. And now scientists think that these gravitational waves could be evidence of two black holes connecting to form a wormhole – a link through space and time. It seems outlandish, but today’s physicists are daring to think the unthinkable – that black holes could connect us to another universe.

At their very heart, black holes are also where Einstein’s Theory of General Relativity is stretched in almost unimaginable ways, revealing black holes as the key to our understanding of the fundamentals of our universe and perhaps all other universes.

Join Professors Brian Cox and Jeff Forshaw in exploring our universe’s most mysterious inhabitants, how they are formed, why they are essential components of every galaxy, including our own, and what secrets they still hold, waiting to be discovered.

Professor Brian Cox is a particle physicist at the University of Manchester. He worked on the ATLAS experiment at the Large Hadron Collider (LHC) at CERN, near Geneva, Switzerland. He previously held a Royal Society University Research Fellowship and a Particle Physics and Astronomy Research Council (PPARC) advanced research fellowship. Professor Cox has written and presented numerous TV series, including Wonders of the Solar System, Wonders of the Universe, Wonders of Life, Human Universe and Forces of Nature which he cowrote both the TV and book. He is also the co-presenter of The Infinite Monkey Cage radio series and book and co-presenter of Stargazing Live!. Cox has co-written several books on physics including Why does E=mc2? and The Quantum Universe, both with Jeff Forshaw.

“It’s as wonderful as the Universe!” — Stephen Colbert, The Colbert Report, on Wonders of the Universe