You Got Anything Stronger?: Stories (Paperback) 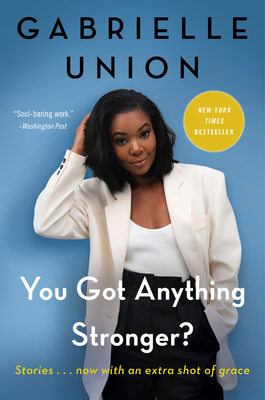 “Funny, tender, and so good.” - Mindy Kaling, #1 New York Times bestselling author of Why Not Me?

"Here is that rare book that will not only touch your heart, but also send you back out there to stand up for yourself and others." - Meena Harris, #1 New York Times bestselling author of Ambitious Girl

“However revealing Union is on her feed, she’s even more so on the page. Blurring the line between public and private, many chapters in You Got Anything Stronger? hinge on the very act of disclosure, the moments where Union relatably brings social media more in line with real life” - The New York Times

“You Got Anything Stronger? continues the project of unshackling. It’s soul-baring work.” - The Washington Post

When I released We’re Going to Need More Wine, the response was so great people asked when I would do a sequel. Frankly, after being so open and honest in my writing, I wasn’t sure there was more of me I was ready to share. But life happens with all its plot twists. And new stories demand to be told.

A lot has changed in four years—I became a mom to two amazing girls. My husband retired. My career has expanded so that I have the opportunity to lift up other voices that need to be heard. But the world has also shown us that we have a lot we still have to fight for—as women, as black women, as mothers, as aging women, as human beings, as friends. In You Got Anything Stronger?, I show you how this ever-changing life presents challenges, even as it gives me moments of pure joy. I take you on a girl’s night at Chateau Marmont, and I also talk to Isis, my character from Bring It On. For the first time, I truly open up about my surrogacy journey and the birth of Kaavia James Union Wade. And I take on racist institutions and practices in the entertainment industry, asking for equality and real accountability. You Got Anything Stronger? is me at my most vulnerable.

Gabrielle Union is an actress, executive producer, activist, best-selling author and most recently, a Time100 cover honoree. Union formed her production shingle “I’ll Have Another” in 2018 with the goal of telling stories that center marginalized communities with their specific point of views in an authentic manner. In August of 2020, she relaunched her haircare brand “Flawless by Gabrielle Union” for women with textured hair. The new and improved collection includes an array of options, affordably priced between $4 - $10, that empowers consumers to customize a regimen specific to their texture and style preferences. Prior to relaunching Flawless, Union learned of the disparities in the food space and joined Bitsy's as a cofounder with the goal of making healthy, allergen- friendly, school-safe snacks that are accessible and affordable for all families regardless of their socioeconomic or geographical status. Her first book, We’re Going To Need More Wine: Stories That Are Funny, Complicated and True, was released in 2017 and instantly became a New York Times best seller. Union serves as a leader and advocate for inclusion in the entertainment industry. She is also a champion of breast health and combating sexual violence.

“However revealing Union is on her feed, she’s even more so on the page. Blurring the line between public and private, many chapters in You Got Anything Stronger? hinge on the very act of disclosure, the moments where Union relatably brings social media more in line with real life”  — New York Times

“You Got Anything Stronger? continues the project of unshackling. It’s soul-baring work.” — Washington Post

“Union deftly writes about the life-changing diagnosis that led her to surrogacy as a path to moth­erhood; the impact of cracking open her family’s life for all to see; and how she discovered who she is beyond others’ projections. . . She makes you wish she were your best friend, her number saved in your favorites—a kindred spirit always ready to share real talk over a round of shots.” — Essence

“In so many ways, You Got Anything Stronger? is about digging deeper into the genre of celebrity memoir—literally giving us something more potent—because Union is honest without crossing her own boundaries of privacy, passionate about social issues without being condescending, and owns up to her own mistakes and struggles while maintaining a really radiant and admirable self-love throughout the book.” — Shondaland

"In her follow-up to her debut memoir, We’re Going to Need More Wine, actor and writer Gabrielle Union picks up where she left off, delving deep into her journey to conceive daughter Kaavia, her experience as a stepmom, and the rest — ugly, beautiful, and in-between. Break out the liquor, folks, because you’re going to want a stiff drink to go with this dish." — Bustle

“You Got Anything Stronger? is a boundary-pushing, self-discovery inducing lesson on vulnerability”  — Parade

Even more open and relatable than her first. This time around the actor and author is opening up about her surrogacy journey, fighting against racial inequality in Hollywood, and her iconic Bring It On character, Isis. Grab a glass of your drink of choice and settle in, because reading Union's essays is every bit as satisfying as a nice, long chat with your best friend. — Popsugar

Funny, tender, and so good. — Mindy Kaling, #1 New York Times bestselling author of Why Not Me?

These essays are brimming with veracity, humor, and daring sincerity that becomes contagious. In depictions of motherhood, Hollywood, and even the most devastating realities, Union keeps a remarkably steady hand; she speaks with the warmth of a late night phone call. — Kiley Reid, New York Times bestselling author of Such a Fun Age

This is an absolute must-read. Gabrielle doesn’t just open up—she opens up conversations we need to be having. — Sunny Hostin, New York Times bestselling author of Summer on the Bluffs and I Am These Truths

Here is that rare book that will not only touch your heart, but also send you back out there to stand up for yourself and others. — Meena Harris, #1 New York Times bestselling author of Ambitious Girl

This book is a masterclass in authenticity and vulnerability, and I loved it! I drank up the words on the pages because this is Gabby’s heart wide open in print. It is a stunning read that is deeply humanizing and I’m inspired by the courage and humor in it. It’s just so DAMB GOOD! — Luvvie Ajayi Jones, New York Times bestselling author of Professional Troublemaker: The Fear-Fighter Manual

Gabrielle Union has written another wonderful book that pulls no punches. The searing honesty of You Got Anything Stronger? is a gift to readers. Union faces head-on the different ways women become mothers and partners in an emotionally resonant and universal way. Her voice is relatable, warm, and sharp. You owe it to yourself to curl up with this book and to pass it along to a friend. — Tressie McMillan Cottom, Professor and MacArthur Fellow

Gabrielle Union is serving us another stellar memoir. . . She gets even deeper in this series of essays that detail what her life is like now, including her experience with surrogacy and racism in the entertainment industry. — Cosmopolitan, "15 Compelling Fall 2021 Books to Add to Your Reading List"

The star actor and producer demonstrates her dedication to empowering young Black women and other marginalized people. As these essays ably show, Union is a dynamic role model for young Black women in all walks of life. — Kirkus Reviews

Union returns with more wise, intimate personal stories. . . The respect with which she writes about the people in her life is a true testament to her character. Always smart, inviting, and generous with emotion, Union's second exquisite memoir reads like a conversation with your most enlightened, thoughtful friend. — Booklist (starred review)