The Unfortunate Traveller and Other Works (Paperback) 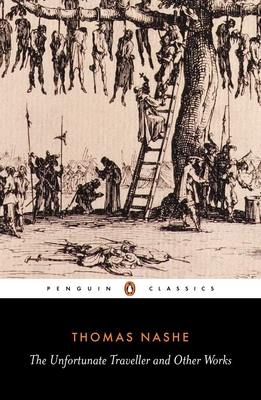 Thomas Nashe, a contemporary of Shakespeare, was writing in the 1590s, the zenith of the English Renaissance. Rebellious in spirit, conservative in philosophy, Nashe's brilliant and comic invective earned him a reputation as the "English Juvenal" who "carried the deadly stockado in his pen." In its mingling of the devout and bawdy, scholarship and slang, its brutality and its constant awareness of the imminence of death, his work epitomizes the ambivalence of the Elizabethans. Above all, Nashe was a great entertainer, "his stories are told for pleasure in telling, his jokes are cracked for the fun of them, and his whole style speaks of a relish for living."

In addition to The Unfortunate Traveller, this volume contains Pierce Penniless, The Terrors of the Night,Lenten Stuff and The Choice of Valentines, and extracts from Christ's Tears over Jerusalem, The Anatomy of Absurdity, and other works.

Thomas Nashe (1567-?) was born in Lowestoft, the son of a minister, and in 1573 the family moved to West Harling, near Thetford. There is no record of Nashe's schooling but in 1581 or 1582 he entered St. John's College, Cambridge, where he became a Lady Margaret scholar, receiving his B.A. in 1586. He left the University in 1588 and began publishing in 1589 with The Anatomy of Absurdity. Nashe was strongly anti-Puritan and this together with his natural combativeness drew him into the Marlprelate controversy: An Almond for a Parrot (1590) is now widely accepted as his along with a number of pseudonymous pamphlets. In his defense of Robert Greene, the first and most prolific of Elizabethan professional writers, Nashe was drawn into a prolonged and bitter literary quarrel with Gabriel Harvey. The latter proved an effective target for Nashe's brilliant, satiric wit, as is shown in Strange News (or The Four Letters Confuted) and the unsparing pseudo-biography of Harvey contained in Have with You to Saffron Walden. The vivid social satire, Pierce Penniless, was the most successful of Nashe's pamphlets and went through three editions in 1592. The Unfortunate Traveller (1594) relating the knavish adventures of Jack Wilton is an important example of picaresque fiction and had a considerable influence on the development of the english novel. Nashe was also part-author (along with Ben Jonson among others) of The Isle of Dogs, which was judged by the authorites to be seditious and thus Nashe was forced to flee from London. In his writings he reveals the conflict in cultural standards which arose between the humanist values of civility and eloquence and the racy vigor of popular folk-tradition. His play Summer's Last Will and Testament pleads for the patronage of letters and also defends the seasonal pastimes of the countryside against the Puritan arguments for thrift. Nashe lived for most of his life in London. The date of his death is uncertain, it is known he was alive early in 1599 and dead in 1601, but it is not know how, when or where he died.