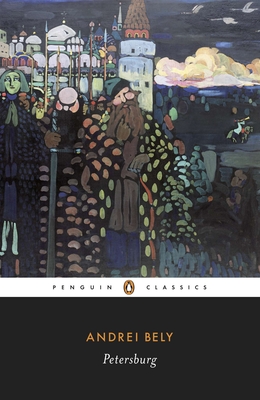 By Andrei Bely, David McDuff (Translated by), Adam Thirlwell (Introduction by)
$19.00
Email or call for price

"The most important [...] Russian novel of the 20th century."
-The New York Times Book Review

Considered Andrei Bely's masterpiece, Petersburg, is a pioneering modernist novel, ranked in importance alongside Ulysses, The Metamorphosis, and In Search of Lost Time, that captures Russia's capital during the short, turbulent period of the first socialist revolution in 1905. Exploring themes of history, identity, and family, it sees the young Russian Nikolai Ableukhov chased through the misty Petersburg streets, tasked with planting a bomb intended to kill a government official-his own father. Bely draws on news, fashion, psychology, and ordinary people to create a distinctive and timeless literary triumph.

Andrei Beley (born Boris Nikolaevich Bugaev) was born 26 October 1880. Beley was educated at Moscow University where he studied science and philosophy, before turning his focus to literature. In 1904 he published his first collection of poems, Gold in Azure, which was followed in 1909 by his first novel, The Silver Dove. Beley's most famous novel, Petersburg, was pubilshed in 1916. His work is considered to have heavily influenced several literary schools, most notably Symbolism, and his impact on Russian writing has been compared to that of James Joyce on the English speaking world.

Adam Thirlwell (b.1978) studied English at New College, Oxford, and was subsequently elected as a fellow of All Souls College, Oxford in 1999. In 2003 his first novel, Politics, won the Betty Trask Award, and Miss Herbert, published in 2007, won the Somerset Maugham Award. Thirlwell's third novel, The Escape, was published in September 2009.

David McDuff was educated at the University of Edinburgh and has translated a number of works for Penguin Classics, including Dostoyevsky’s The Brothers Karamazov.