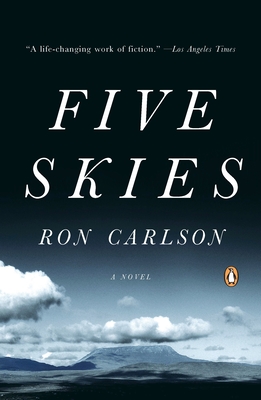 Beloved story writer Ron Carlson's first novel in thirty years, Five Skies is the story of three men gathered high in the Rocky Mountains for a construction project that is to last the summer. Having participated in a spectacular betrayal in Los Angeles, the giant, silent Arthur Key drifts into work as a carpenter in southern Idaho. Here he is hired, along with the shiftless and charming Ronnie Panelli, to build a stunt ramp beside a cavernous void. The two will be led by Darwin Gallegos, the foreman of the local ranch who is filled with a primeval rage at God, at man, at life.

As they endeavor upon this simple, grand project, the three reveal themselves in cautiously resonant, profound ways. And in a voice of striking intimacy and grace, Carlson's novel reveals itself as a story of biblical, almost spiritual force. A bellwether return from one of our greatest craftsmen, Five Skies is sure to be one of the most praised and cherished novels of the year.

Ron Carlson is the award-winning author of four story collections and four novels, most recently Five Skies. His fiction has appeared in Harper’s, The New Yorker, Playboy, and GQ, and has been featured on NPR’s This American Life and Selected Shorts as well as in Best American Short Stories and The O. Henry Prize Stories. His novella, “Beanball,” was recently selected for Best American Mystery Stories. He is the director of the UC Irvine writing program and lives in Huntington Beach, California.