A Dance to the Music of Time: Second Movement (Paperback) 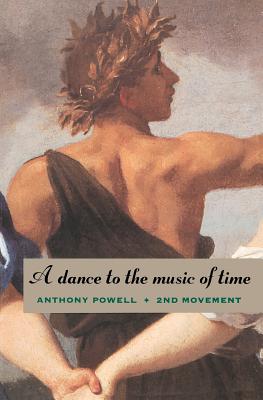 Throughout 2013, the Island Books blog, Message in a Bottle, hosted an online discussion of Anthony Powell's masterwork A Dance to the Music of Time. It's a supreme entertainment by a brilliant literary artist, and we highly recommend it.

Powell surveys decades of the English social scene in such amusing style that Time magazine added Dance to its list of the best fiction of the 20th century. He has the sophisticated eye for manners of an English Proust, but also a masterly sense of episodic pacing—the eagerness to find out what happens next in his writing is as pronounced as it is for fans of cultish, cliffhanger-filled TV shows such as Mad Men or Game of Thrones. If that doesn’t sell you, how about this? An acquaintance of ours at another bookstore described her time with the series as “the greatest reading experience of [her] life.” You can relive our conversation about these books through the links below, though be warned: spoilers ahead.

Anthony Powell's universally acclaimed epic encompasses a four-volume panorama of twentieth century London. Hailed by Time as "brilliant literary comedy as well as a brilliant sketch of the times," A Dance to the Music of Time opens just after World War I. Amid the fever of the 1920s and the first chill of the 1930s, Nick Jenkins and his friends confront sex, society, business, and art. In the second volume they move to London in a whirl of marriage and adulteries, fashions and frivolities, personal triumphs and failures. These books "provide an unsurpassed picture, at once gay and melancholy, of social and artistic life in Britain between the wars" (Arthur Schlesinger, Jr.). The third volume follows Nick into army life and evokes London during the blitz. In the climactic final volume, England has won the war and must now count the losses.

In the background of this second volume of A Dance to the Music of Time, the rumble of distant events in Germany and Spain presages the storm of World War II. In England, even as the whirl of marriages and adulteries, fashions and frivolities, personal triumphs and failures gathers speed, men and women find themselves on the brink of fateful choices.

Includes these novels:
At Lady Molly's
Casanova's Chinese Restaurant
The Kindly Ones

"Anthony Powell is the best living English novelist by far. His admirers are addicts, let us face it, held in thrall by a magician."—Chicago Tribune

"A book which creates a world and explores it in depth, which ponders changing relationships and values, which creates brilliantly living and diverse characters and then watches them grow and change in their milieu. . . . Powell's world is as large and as complex as Proust's."—Elizabeth Janeway, New York Times

"One of the most important works of fiction since the Second World War. . . . The novel looked, as it began, something like a comedy of manners; then, for a while, like a tragedy of manners; now like a vastly entertaining, deeply melancholy, yet somehow courageous statement about human experience."—Naomi Bliven, New Yorker

Anthony Powell's work includes Miscellaneous Verdicts and Under Review, both available from the University of Chicago Press.