Allah is Not Obliged (Paperback) 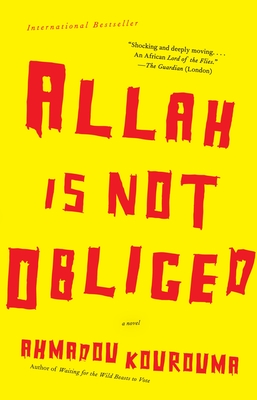 By Ahmadou Kourouma
$15.00
Email or call for price

ALLAH IS NOT OBLIGED TO BE FAIR ABOUT ALL THE THINGS HE DOES HERE ON EARTH.These are the words of the boy soldier Birahima in the final masterpiece by one of Africa’s most celebrated writers, Ahmadou Kourouma. When ten-year-old Birahima's mother dies, he leaves his native village in the Ivory Coast, accompanied by the sorcerer and cook Yacouba, to search for his aunt Mahan. Crossing the border into Liberia, they are seized by rebels and forced into military service. Birahima is given a Kalashnikov, minimal rations of food, a small supply of dope and a tiny wage. Fighting in a chaotic civil war alongside many other boys, Birahima sees death, torture, dismemberment and madness but somehow manages to retain his own sanity. Raw and unforgettable, despairing yet filled with laughter, Allah Is Not Obliged reveals the ways in which children's innocence and youth are compromised by war.

Ahmadou Kourouma was born in the Ivory Coast in 1927. He was the author of the novels The Suns of Independence, Monnew, and Waiting for the Wild Beasts to Vote. Hailed as one of the leading African writers in French, he died in 2003.

“A tour de force — original, irreverent, brutal, funny, poetic — in which history and myth are brilliantly evoked.” —The Independent (London)“This is one of the funniest, most powerful, most intense novels to appear in French for a decade.” —Le Nouvel Observateur (Paris)“Shocking and deeply moving. . . . . An African Lord of the Flies.” —The Guardian (London)“Witty and wholly authentic. . . . Spellbinding. . . . Kourouma has been likened to Voltaire. . . Gabriel García Márquez also comes to mind, likewise John Updike’s sparkling ventriloquism.” —The Spectator (London)