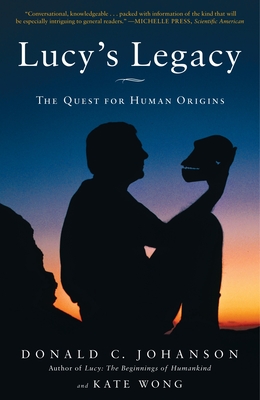 “Lucy is a 3.2-million-year-old skeleton who has become the spokeswoman for human evolution. She is perhaps the best known and most studied fossil hominid of the twentieth century, the benchmark by which other discoveries of human ancestors are judged.”–From Lucy’s Legacy

In his New York Times bestseller, Lucy: The Beginnings of Humankind, renowned paleoanthropologist Donald Johanson told the incredible story of his discovery of a partial female skeleton that revolutionized the study of human origins. Lucy literally changed our understanding of our world and who we come from. Since that dramatic find in 1974, there has been heated debate and–most important–more groundbreaking discoveries that have further transformed our understanding of when and how humans evolved.

In Lucy’s Legacy, Johanson takes readers on a fascinating tour of the last three decades of study–the most exciting period of paleoanthropologic investigation thus far. In that time, Johanson and his colleagues have uncovered a total of 363 specimens of Australopithecus afarensis (Lucy’s species, a transitional creature between apes and humans), spanning 400,000 years. As a result, we now have a unique fossil record of one branch of our family tree–that family being humanity–a tree that is believed to date back a staggering 7 million years.

Focusing on dramatic new fossil finds and breakthrough advances in DNA research, Johanson provides the latest answers that post-Lucy paleoanthropologists are finding to questions such as: How did Homo sapiens evolve? When and where did our species originate? What separates hominids from the apes? What was the nature of Neandertal and modern human encounters? What mysteries about human evolution remain to be solved?

Donald Johanson is a passionate guide on an extraordinary journey from the ancient landscape of Hadar, Ethiopia–where Lucy was unearthed and where many other exciting fossil discoveries have since been made–to a seaside cave in South Africa that once sheltered early members of our own species, and many other significant sites. Thirty-five years after Lucy, Johanson continues to enthusiastically probe the origins of our species and what it means to be human.

KATE WONG has been covering human evolution for Scientific American for more than a decade.

"Very engaging, thanks perhaps to popular scientific journalist Wong, [LUCY'S LEGACY] communicates the poignancy of Johanson's occasionally nerve-wracking return to the birthplace of his career with something of the verve and suspense of an Indiana Jones movie. Hooked by that adventurous beginning, and introduced to many of the figures whose work preoccupies what follows, many will continue with the book's real meat, which implicatively but not literally argues that far from there being no missing link between apes and humans, there are several, complicatedly related, with more being found and likely to be found in the foreseeable future."
–Booklist (starred review)

Lucy: The Beginnings of Humankind

“A fascinating, candid, and scientifically reliable account of one of the most compelling scientific investigations ever undertaken–the effort to understand how human beings evolved.”
—New York Times

“A glorious success . . . The science manages to be as exciting and spellbinding as the juiciest gossip.”
—San Francisco Chronicle

“Johanson is doing for the earth what Carl Sagan has done for the cosmos.”
—Cleveland Plain Dealer

“Superb adventure . . . Lucy’s Child burns with the infectious excitement of hominid fever–the tedium and doubting, and the ultimate triumph of an expedition that unearths something wonderful about the origins of humanity.”
—Peter Gorner, Chicago Tribune

“An authoritative and gripping account . . . brilliant . . . an up-to-date, eloquent story of human evolution.”
—John Pfeiffer, author of The Emergence of Humankind


From Lucy to Language