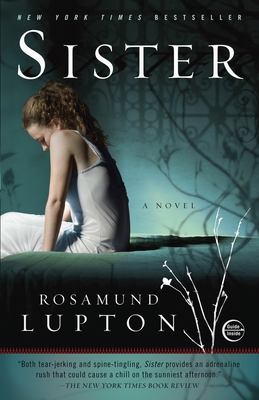 “In this debut novel, Beatrice is informed of her sister's disappearance and she returns home to London to fulfill what she assumes will be her usual big-sister-role over the free-spirited Tess. Instead, when Tess is found dead by apparent suicide, Beatrice delves into her life and becomes obsessed with solving what she believes to be a case of murder. Beatrice's recounting of her sister's death becomes a letter of tribute to Tess and touches the reader with the depth of a sister's bond. Written with a clever twist, Sister is both poignant and captivating.”
— Julia MacDonald, The Yankee Bookshop, Woodstock, VT

"Lupton enters the highly charged ring where the best psychological detective writers spar... Like Kate Atkinson, Patricia Highsmith and Ruth Rendell… Both tear-jerking and spine-tingling, Sister provides an adrenaline rush that could cause a chill on the sunniest afternoon." —The New York Times Book Review

When her mom calls to tell her that Tess, her younger sister, is missing, Bee returns home to London on the first flight. She expects to find Tess and give her the usual lecture, the bossy big sister scolding her flighty baby sister for taking off without letting anyone know her plans. Tess has always been a free spirit, an artist who takes risks, while conservative Bee couldn’t be more different. Bee is used to watching out for her wayward sibling and is fiercely protective of Tess (and has always been a little stern about her antics). But then Tess is found dead, apparently by her own hand.

Bee is certain that Tess didn’t commit suicide. Their family and the police accept the sad reality, but Bee feels sure that Tess has been murdered.  Single-minded in her search for a killer, Bee moves into Tess's apartment and throws herself headlong into her sister's life--and all its secrets.

Though her family and the police see a grieving sister in denial, unwilling to accept the facts, Bee uncovers the affair Tess was having with a married man and the pregnancy that resulted, and her difficultly with a stalker who may have crossed the line when Tess refused his advances. Tess was also participating in an experimental medical trial that might have gone very wrong.  As a determined Bee gives her statement to the lead investigator, her story reveals a predator who got away with murder--and an obsession that may cost Bee her own life.

A thrilling story of fierce love between siblings, Sister is a suspenseful and accomplished debut with a stunning twist.

Rosamund Lupton is the internationally bestselling and critically acclaimed author of the novels Sister and Afterwards. Her New York Times bestselling debut, Sister, was a New York Times Editor’s Choice and Target Book Club pick, and has been translated into over thirty languages with international sales of over 1.5 million copies. Lupton lives in London with her husband and two sons.

"Lupton enters the highly charged ring where the best psychological detective writers spar... Like Kate Atkinson, Patricia Highsmith and Ruth Rendell… Both tear-jerking and spine-tingling, SISTER provides an adrenaline rush that could cause a chill on the sunniest afternoon." —The New York Times Book Review

"Eerie psychological mystery...With its loving portrayal of what it means to be a sister balanced by some impressively Hitchcockian twists, SISTER should appeal to fans of the character-driven mysteries of Kate Atkinson and Tana French." —CSMonitor.com

"Elegantly suspenseful...a pulse-quickening cocktail of science fiction and whodunit, with a splash of literary poetics and poignancy."--NPR.org

“[A] fast-paced, absurdly entertaining novel....Along with a juicy mystery, it resounds with an authentic sense of sisterly love and loyalty.” —The Boston Globe

"SISTER is an emotionally resonant and tightly drawn novel." —The Post and Courier

"A remarkable piece of work. Lupton shrewdly and compassionately peels back the story's rich layers." —The Seattle Times

“For those of us with sisters, a reminder of how lucky we are.” —Pittsburgh Post Gazette

“A winner, as worth reading for its psychological intensity as it is for its mystery plot, not to mention the genuinely surprising twist near the end.” —BookReporter

"A poignant and perceptive depiction of the emotional bonds between two sisters…The result is a superb thriller, full of twists and turns, false leads and a surprise ending—all seamlessly woven into a touching story of a sisterly bond." —BookPage

"Gripping and haunting, this whodunit explores the powerful bond between sisters." —All You Magazine

"Beautifully written with an unexpected twist at the end...Thriller fans will eagerly await Lupton’s next book" —Library Journal, starred review

"Truly marvelous! As compelling as it is stylish, SISTER exists in that rare place where crime fiction and literature coincide." —Jeffery Deaver

"Poignant and thrilling, this clever debut explores the fascinating bond between sisters, and haunts you with the power of their love." —Chevy Stevens, New York Times bestselling author of Still Missing

"Intense and absorbing from the very first page, SISTER is as much a tender exploration of the complicated, twisty, messy love between sisters, as it is an utterly gripping and compelling thriller...A haunting and accomplished debut." —Lisa Unger, New York Times bestselling author of Fragile

"Both beautiful and suspenseful, SISTER is an absolutely stunning debut.  The ending will leave you reeling." —Alafair Burke, author of Long Gone