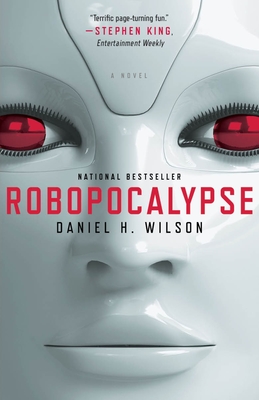 An action packed Scifi thriller that feels like a movie in a book. The author studied robotics so his vision of the robot uprising feels real(ish). Speilberg is working on this movie now!

In this terrifying tale of humanity’s desperate stand against a robot uprising, Daniel H. Wilson has written the most entertaining sci-fi thriller in years.

Not far into our future, the dazzling technology that runs our world turns against us. Controlled by a childlike—yet massively powerful—artificial intelligence known as Archos, the global network of machines on which our world has grown dependent suddenly becomes an implacable, deadly foe. At Zero Hour—the moment the robots attack—the human race is almost annihilated, but as its scattered remnants regroup, humanity for the first time unites in a determined effort to fight back. This is the oral history of that conflict, told by an international cast of survivors who experienced this long and bloody confrontation with the machines. Brilliantly conceived and amazingly detailed, Robopocalypse is an action-packed epic with chilling implications about the real technology that surrounds us.

Daniel H. Wilson earned a Ph.D. in robotics from Carnegie Mellon University. He is the author of Robogenesis, The Clockwork Dynasty, How to Survive a Robot Uprising, Where’s My Jetpack?, How to Build a Robot Army, The Mad Scientist Hall of Fame, Bro-Jitsu: The Martial Art of Sibling Smackdown, and A Boy and His Bot.

“An ingenious, instantly visual story of war between humans and robots.”
—The New York Times

“Richly haunting. . . . Wilson has terrific timing in building a page-turner around the perils of technology’s advance into our lives.”
—Los Angeles Times

“An Andromeda Strain for the new century, this is visionary fiction at its best: harrowing, brilliantly rendered, and far, far too believable.”
—Lincoln Child

“A tour de force. . . . A fast-paced, engrossing page-turner that is impossible to put down. . . . Wilson’s taut prose and the imaginative scope of his story make him a worthy successor to the likes of Michael Crichton, Kurt Vonnegut and Isaac Asimov.”
—Buffalo News

“A superbly entertaining thriller. . . . [Robopocalypse has] everything you’d want in a beach book.”
—Richmond Times-Dispatch

“You’re swept away against your will. . . . A riveting page turner.”
—Associated Press

“[Wilson] presents a doomsday scenario more plausible than most. No vampires, no zombies. . . . Science fiction has been grappling with the possibility of traitorous computers and mutinous androids for much of its history, but Wilson has devised a way to put an original spin on the material. Robopocalypse is a well-constructed entertainment machine, perfect for summer reading. It’s especially refreshing to read an end-of-the-world novel that’s actually self-contained, that doesn’t require the investment in two or three more thick volumes to deliver the apocalyptic goods.”
—The San Francisco Chronicle

“Wilson’s training as a roboticist makes accepting a ubiquitous robot presence natural to the author; it also helps him imagine and describe some amazing machines, efficient, logically designed and utterly inimical to human life. . . . [Robopocalypse] reads at times like horror. That its events are scientifically plausible makes them all the more frightening.”
—Seattle Times

“A gripping, utterly plausible, often terrifying account of a global apocalypse brought on by a transcendent AI that hijacks the planet's automation systems and uses them in a vicious attempt to wipe out humanity.”
—Cory Doctorow, Boing Boing

“Robopocalypse is the kind of robot uprising novel that could only have been written in an era when robots are becoming an ordinary part of our lives. This isn’t speculation about a far-future world full of incomprehensible synthetic beings. It’s five minutes into the future of our Earth, full of the robots we take for granted. If you want a rip-roaring good read this summer, Robopocalypse is your book.”
—io9.com

“This electrifying thriller . . . will entertain you, but it will also make you think about our technology dependency.”
—Parade Magazine

“A brilliantly conceived thriller that could well become horrific reality. A captivating tale, Robopocalypse will grip your imagination from the first word to the last, on a wild rip you won’t soon forget. What a read . . . unlike anything I’ve read before.”
—Clive Cussler

“[A] frenetic thriller. . . . Wilson, like the late Crichton, is skilled in combining cutting-edge technology with gripping action scenes.”
—Booklist