The Admirals: Nimitz, Halsey, Leahy, and King--The Five-Star Admirals Who Won the War at Sea (Paperback) 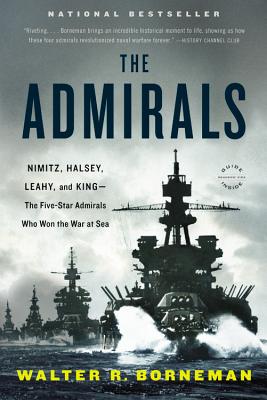 How history's only five-star admirals triumphed in World War II and made the United States the world's dominant sea power.

Only four men in American history have been promoted to the five-star rank of Admiral of the Fleet: William Leahy, Ernest King, Chester Nimitz, and William Halsey. These four men were the best and the brightest the navy produced, and together they led the U.S. navy to victory in World War II, establishing the United States as the world's greatest fleet.

In The Admirals, award-winning historian Walter R. Borneman tells their story in full detail for the first time. Drawing upon journals, ship logs, and other primary sources, he brings an incredible historical moment to life, showing us how the four admirals revolutionized naval warfare forever with submarines and aircraft carriers, and how these men -- who were both friends and rivals -- worked together to ensure that the Axis fleets lay destroyed on the ocean floor at the end of World War II.

Walter Borneman is the author of eight works of nonfiction, including The Admirals, 1812, The French and Indian War, and Polk. He holds both a master's degree in history and a law degree. He lives in Colorado.

"The first book to deal with the four [admirals] together, focusing on their intertwined lives, friendships, and rivalries....A very well-crafted book."—John Lehman, Washington Post

"In his superbly reported new book, historian Walter R. Borneman tackles the essential question of military leadership: What makes some men, but not others, able to motivate a fighting force into battle?"—Tony Perry, Los Angeles Times

"Engagingly written and deeply researched... Mr. Borneman makes it easy to understand the complex series of maneuvers and counter-maneuvers at Leyte Gulf...which is not always the case with accounts of the battle."—Andrew Roberts, Wall Street Journal

"Borneman demonstrates comprehensive command of published and unpublished sources, fingertip understanding of the period, and a polished writing style in this unique collective biography of the four men who 'with a combination of nimble counsel, exasperating ego, studied patience, and street-fighter tactics' shaped the modern U.S. Navy to win WWII at sea."—Publishers Weekly

"Borneman deftly manipulates multiple narrative strands and a wealth of detail. He vividly fleshes out the numerous vain, ambitious men vying for power at the top and examines their important decisions and lasting ramifications. An accomplished, readable history lesson."—Kirkus Reviews

"Walter Borneman's The Admirals is an epic group portrait of Nimitz, Halsey, Leahey, and King. Not since the heyday of Samuel Eliot Morison has a historian painted such a fine portrait of the five-star admirals who helped America beat Japan during the Second World War. Highly recommended!"—Douglas Brinkley, Professor of History at Rice University and author of The Wilderness Warrior

"They were completely different in temperament and personality, but the U.S. Navy's four five-star admirals in World War II shared a sense of vision, devotion, and courage. Walter Borneman has written a rousing tale of victory at sea."—Evan Thomas, author of The War Lovers

"This is Walter Borneman at his best. The portrait of the forgotten admiral, Leahy, is worth the whole book. But there's scarcely a page where a reader won't learn something unexpected, and occasionally shocking."—Thomas Fleming, author of Time and Tide