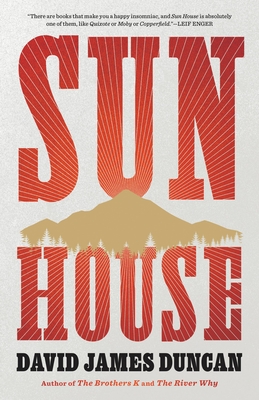 An epic comedy, sixteen years in the making, about love, spirit, and the quest for transcendence in an anything-but-transcendent America, from the author of the perennial cult bestsellers The River Why and The Brothers K.

A bolt from an Aero México DC-8 falls from the sky, killing a Mexican girl and throwing the faith of a young American Jesuit into crisis. Jamey Van Zandt's mother dies on his fifth birthday, sparking a lifetime of repressed anger that he only unlashes once a year when he recklessly duels the Fate, God, or Power who let the coincidence happen. A young woman, Risa McKeig, runs through the streets of Seattle experiencing a shooting star moment that pierces her world with a love that will eventually help heal both the Jesuit and the angry actor.

The sometimes heartbreaking, sometimes hilarious journeys of this "unintentional menagerie" carry them to the healing lands of Montana's Elkmoon Beguine & Cattle Company, where nothing tastes better than four fingers of Maker's Mark mixed with glacier ice, nothing sounds lovelier than a lone flycatcher's mating song, and nothing seems less likely than the delight a bunch of urban sophisticates, Montana cowboys, road-weary musicians, and spiritual refugees begin to find in each other's company.

With Sun House, David James Duncan continues the exploration of the search for meaning and love that he began in his acclaimed novels The River Why and The Brothers K. This stunning novel illuminates the contemporary American West through the prisms of Eastern wisdom and the unpredictable, expansive yearnings of the human heart.

David James Duncan is a father, a renowned fly fisher, an activist, and the author of the novels The River Why and The Brothers K, the story collection River Teeth, and the nonfiction collections My Story as Told by Water—a National Book Award finalist—and God Laughs & Plays. His work has won three Pacific Northwest Booksellers Awards, two Pushcart Prizes, a Lannan Fellowship, the Western States Book Award, a National Book Award nomination, inclusion in BestAmerican Essays, Best American Sports Writing, Best American Catholic Writing, five volumes of Best AmericanSpiritual Writing, an honorary doctorate from University of Portland, the American Library Association's 2004 Award for the Preservation of Intellectual Freedom (with co-author Wendell Berry), and other honors. David lives in Missoula, Montana.

Praise for The Brothers K:

"The Brothers K succeeds on almost every level and every page."—USA Today

Praise for The River Why:

"Sun House is a book of healing that will earn a place on the shelf between the world’s ancient wisdom texts and Mark Twain...Here is a book like nothing I have ever read, an epic story about how we may be made whole in a broken time."—KATHLEEN DEAN MOORE, author of Earth's Wild Music

“…one of the greatest imaginative achievements I have encountered in a lifetime of reading. Page after page brims with invention, mirth, knowledge, irreverence, and deep wisdom…Obviously, the book is giant in size and scope, and some prospective readers will be put off by its length. The cure for any hesitation, however, is simple: just start reading…the world of Sun House is an aspirational place that holds out, not just what might be and must be, but how one might carry oneself through the storms besetting the way."—WILLIAM DEBUYS, author of The Trail to Kanjiroba: Rediscovering Earth in an Age of Loss