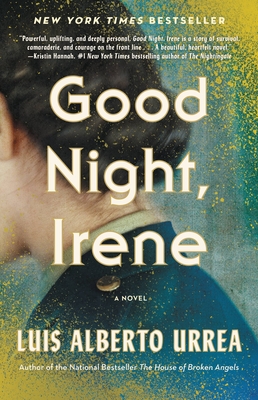 What if a friendship forged on the front lines of war defines a life forever? In the tradition of The Nightingale and Transcription, a searing epic based on the magnificent and true story of heroic Red Cross women.

“Urrea’s touch is sure, his exuberance carries you through . . . He is a generous writer, not just in his approach to his craft but in the broader sense of what he feels necessary to capture about life itself.” —Financial Times

In 1943, Irene Woodward abandons an abusive fiancé in New York to enlist with the Red Cross and head to Europe. She makes fast friends in training with Dorothy Dunford, a towering Midwesterner with a ferocious wit. Together they are part of an elite group of women, nicknamed Donut Dollies, who command military vehicles called Clubmobiles at the front line, providing camaraderie and a taste of home that may be the only solace before troops head into battle.

After D-Day, these two intrepid friends join the Allied soldiers streaming into France. Their time in Europe will see them embroiled in danger, from the Battle of the Bulge to the liberation of Buchenwald. Through her friendship with Dorothy, and a love affair with a courageous American fighter pilot named Hans, Irene learns to trust again. Her most fervent hope, which becomes more precarious by the day, is for all three of them to survive the war intact.

Taking as inspiration his mother’s own Red Cross service, Luis Alberto Urrea has delivered an overlooked story of women’s heroism in World War II. With its affecting and uplifting portrait of friendship and valor in harrowing circumstances, Good Night, Irene powerfully demonstrates yet again that Urrea’s “gifts as a storyteller are prodigious” (NPR).

A finalist for the Pulitzer Prize for his landmark work of nonfiction The Devil’s Highway, now in its 30th paperback printing, Luis Alberto Urrea is the author of numerous other works of nonfiction, poetry, and fiction, including the national bestsellers The Hummingbird’s Daughter and The House of Broken Angels, a National Book Critics Circle Award finalist. A recipient of an American Academy of Arts and Letters Award, among many other honors, he lives outside Chicago and teaches at the University of Illinois Chicago.

Praise for Good Night, Irene:
“Good Night, Irene is a beautiful, heartfelt novel that celebrates the intense power and durability of female friendship while shining a light on one of the fascinating lost women’s stories of World War II. Inspired by his own family history—and his mother’s heroism as a Red Cross volunteer during the war—Luis Urrea has created an indelible portrait of women’s courage under extreme adversity. Powerful, uplifting, and deeply personal, Good Night, Irene is a story of survival, camaraderie, and courage on the front line.”—Kristin Hannah, #1 New York Times bestselling author of The Nightingale and The Four Winds

“Every once in a while the universe opens its heart and pulls out a book like this novel, gifting it to the cosmos. In Good Night, Irene, a new element has been created, and the literary world is reborn in the image of Luis Alberto Urrea. His voice comes alive on every page of this magnificent novel.”—Jamie Ford, New York Times bestselling author of The Many Daughters of Afong Moy and Hotel on the Corner of Bitter and Sweet

Praise for The House of Broken Angels:

"Epic . . . Rambunctious . . . Highly entertaining . . . Sorrowful and funny . . . Cheerfully profane . . . The quips and jokes come fast through a poignant novel that is very much about time itself . . . A powerful rendering of a Mexican-American family that is also an American family."—Viet Thanh Nguyen, New York Times Book Review

"A raucous, moving, and necessary book...Intimate and touching...The stuff of legend...There's deep heart and tenderness in this novel.The House of Broken Angels is, at its most political, a border story...Chillingly accurate, they're heartbreaking, and infuriating."—Alexis Burling, San Francisco Chronicle

"An immensely charming and moving tale...Urrea deftly inhabits many points of view, dreaming up an internal voice for each...It is a testament to his swift and lucid characterizations that one does not want to leave this party...A novel like The House of Broken Angels is a radical act. It is a big, epic story about how hard it is to love with all of your heart, and all of your family--regardless of which side of the border they live on."—John Freeman, Boston Globe

"The House of Broken Angels is a big, sprawling, messy, sexy, raucous house party of a book, a pan-generational family saga with an enormous, bounding heart, a poetic delivery, and plenty of swagger...More than once while reading the novel, I thought of James Joyce's 'The Dead,' another kaleidoscopic fable of family life that skillfully mixes perspectives...The House of Broken Angels is a book about celebration that is, itself, a celebration."—Michael Lindgren, Washington Post

"Urrea's gifts as a storyteller are prodigious...The book's spirit is irrepressibly high. Even in its saddest moments, The House of Broken Angels hums with joy...The noveloverflows with the pleasure of family...And all that vulnerability, combined with humor and celebration and Urrea's vivid prose, will crack you open."—Lily Meyer, NPR

“A heart-wrenching wartime drama, a rich portrait of friendship, and an exploration of the trials and triumphs of the human spirit, Good Night, Irene is historical fiction at its finest. Using the little-known true story of women who worked behind the front lines for the Red Cross during World War II, Luis Alberto Urrea weaves a novel about the enduring bonds, devastating losses, and heroism of ordinary people who put their lives on the line for freedom. This is a story that needed to be told and remembered.”
—Christina Baker Kline, #1 New York Times bestselling author of Orphan Train and The Exiles