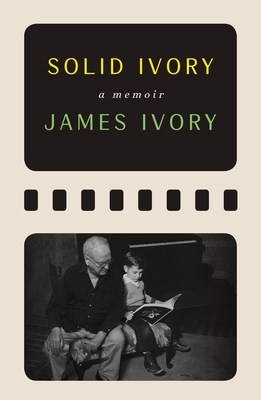 The irreverent, brilliant memoirs of the legendary filmmaker James Ivory

In Solid Ivory, a carefully crafted mosaic of memories, portraits, and reflections, the Academy Award–winning filmmaker James Ivory, a partner in the legendary Merchant Ivory Productions and the director of A Room with a View, Howards End, Maurice, and The Remains of the Day, tells stories from his remarkable life and career as one of the most influential directors of his time. At times, he touches on his love affairs, looking back coolly and with unexpected frankness.

From first meeting his collaborator and life partner, Ismail Merchant, at the Indian Consulate in New York to winning an Academy Award at age eighty-nine for Call Me by Your Name; from seeing his first film at age five in Klamath Falls, Oregon, to memories of Satyajit Ray, Jean Renoir, The New Yorker magazine’s film critic Pauline Kael (his longtime enemy), Vanessa Redgrave, J. D. Salinger, George Cukor, Kenneth Clark, Bruce Chatwin, Ruth Prawer Jhabvala, and Merchant—Ivory writes with invariable fluency, wit, and perception about what made him who he is and how he made the movies for which he is known and loved.

Solid Ivory, edited by Peter Cameron, is an utterly winning portrait of an extraordinary life told by an unmatched storyteller.

James Ivory is an Academy Award–winning director, producer, and screenwriter. His directorial work includes A Room with a View, Howards End, and The Remains of the Day, for each of which he was nominated for the Academy Award for Best Director. In 2017, he won an Academy Award for Best Adapted Screenplay for Call Me by Your Name. He has also won three BAFTA Awards, a Directors Guild of America Lifetime Achievement Award, and a Writers Guild of America Award, among many other honors.

Peter Cameron is the author of Andorra (FSG, 1997), The City of Your Final Destination (FSG, 2002), and Someday This Pain Will Be Useful to You (FSG, 2007). His work has appeared in The New Yorker, Grand Street, and The Paris Review. He lives in New York City.

“As memoirs go, Solid Ivory is candid, informative and infused with warmth, verve and humor. Sit back and enjoy a series of well-executed master shots and captivating close-ups.” —Malcolm Forbes, The Wall Street Journal

"[Ivory recollects] a photo album’s worth of men (with album photos, too) who were friends or lovers, recalling his younger days with all the panache of a Cole Porter song, if Porter also wrote deft lyrics about male genitalia . . . There’s a warmth to his earthiness about his personal life . . . There is a calm self-assessment of how he operates as a director . . . And scattered throughout, there are perfect, martini-dry vignettes of various people who have passed through his rather marvelous life . . . Oh, there is so much good stuff here! —Lisa Schwarzbaum, The New York Times Book Review

“Over twenty films. Over forty years. What collaboration in any medium has lasted so long, been so successful, so personal, so happy? James Ivory met Ismail Merchant (in 1961) and Ruth Prawer Jhabvala (in 1962), and one of the earliest, most durable, most independent of independent film families came to life. The widest varieties of stories (neorealist memoirs, literary adaptations, avant-garde experiments) and settings (England, France, Italy, India, the Americas North and South); the broadest collection of superb actors and artists (Vanessa Redgrave, Paul Newman, Anthony Hopkins, Shashi Kapoor, Maggie Smith, Subrata Mitra!). Read this wonderfully entertaining book: a unique story of a unique life in the world of world cinema.” —WES ANDERSON

“It's a touching, illuminating story about growing up in a world to which he didn't quite belong—seasoned, of course, with delicious stories of a life in showbiz—that's essential reading for any fan of his work on screen.” —Town and Country Magazine

“A memoir as eloquent and gracious as his films, James Ivory’s page-turner brims over with the boldness, candor, and modesty that only great minds can claim. Places, objects, bodies, people, and so many names all have a place in his unassailably brilliant life.” —ANDRÉ ACIMAN, author of Call Me by Your Name

“Jim is as eloquent and elegant with words as with the camera; here are almost a series of short stories of his life, vivid snapshots, told with an exacting eye. Every sentence is filled with his wry cadence, guided by his appreciation of things beautiful, amusing, and unusual. We take the tour of his life, which has as fascinating a cast and is set in locations as far-flung and exotic as his films—except with way more sex. Jim is now in his ninth decade, and I believe his secret elixir is a delight in life—read it and drink it in!” —HELENA BONHAM CARTER

“The producer-director's memoirs are as stately and intimate as his indelible films.” —Michelle Hart, Oprah Daily

"“It is this sense of perspective, good humor, and a willingness to go with the flow that shines through in his writing. Ivory’s book makes for a charming, yet unconventional, entertainment industry memoir.” —David Vogel, The Chicago Review of Books

“How does someone become James Ivory? How does someone become one of the finest moviemakers of his time? These pages provide us with a key to unlock this enigma: friendship, travels, love, desire, and, of course, sometimes disillusions and hardships. The collision of all these experiences in the life of Ivory gave us some of the most beautiful and empowering films of the last decades.” —ÉDOUARD LOUIS, author of Who Killed My Father

“His memoir will delight film buffs, of course, but it will also appeal to general readers who value intelligent writing and insights into the lives of accomplished people.” —Booklist (Starred Review)