The Landmark Herodotus: The Histories (Hardcover) 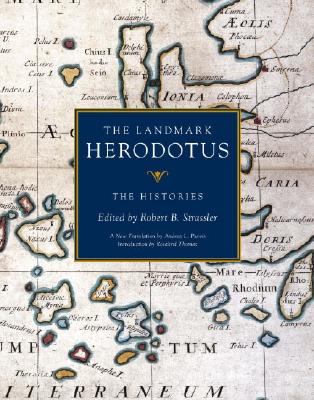 From the editor of the widely praised The Landmark Thucydides, a new Landmark Edition of The Histories by Herodotus, the greatest classical work of history ever written.

Herodotus was a Greek historian living in Ionia during the fifth century BCE. He traveled extensively through the lands of the Mediterranean and the Black Sea and collected stories, and then recounted his experiences with the varied people and cultures he encountered. Cicero called him “the father of history,” and his only work, The Histories, is considered the first true piece of historical writing in Western literature. With lucid prose that harks back to the time of oral tradition, Herodotus set a standard for narrative nonfiction that continues to this day.

In The Histories, Herodotus chronicles the rise of the Persian Empire and its dramatic war with the Greek city-states. Within that story he includes rich veins of anthropology, ethnography, geology, and geography, pioneering these fields of study, and explores such universal themes as the nature of freedom, the role of religion, the human costs of war, and the dangers of absolute power.

Ten years in the making, The Landmark Herodotus gives us a new, dazzling translation by Andrea L. Purvis that makes this remarkable work of literature more accessible than ever before. Illustrated, annotated, and filled with maps, this edition also includes an introduction by Rosalind Thomas and twenty-one appendices written by scholars at the top of their fields, covering such topics as Athenian government, Egypt, Scythia, Persian arms and tactics, the Spartan state, oracles, religion, tyranny, and women.

Like The Landmark Thucydides before it, The Landmark Herodotus is destined to be the most readable and comprehensively useful edition of The Histories available.

Robert B. Strassler is an independent scholar whose articles have appeared in the "Journal of Hellenic Studies." He holds an honorary doctorate of humanities and letters from Bard College and is chairman of the Aston Magna Foundation for Music and the Humanities. He lives in Brookline, Massachusetts.

Praise for THE LANDMARK THUCYDIDES


"A magnificent edition of the great historian's The Peloponnesian War."
--Los Angeles Times

"Without question, this is the finest edition of Thucydides' history ever produced. It is a treasure."
--The Washington Times

"This is the best book with which to start study of Thucydides and the Peloponnesian War."
--Donald Kagan, author of On the Origins of War and Pericles of Athens and the Birth of Democracy

"Thoroughly readable.... Anyone interested in the culture of conflict--political as well as military, contemporary as well as ancient--can learn much from this durable work."
--The Boston Globe

"The editor and his contributors have asked themselves the fundamental question: how can one best present and interpret the work of one of the most fascinating but difficult of ancient authors to a modern audience? They have answered this question brilliantly."
--Classical Quarterly