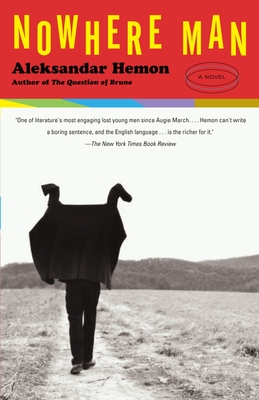 A native of Sarajevo, where he spends his adolescence trying to become Bosnia’s answer to John Lennon, Jozef Pronek comes to the United States in 1992—just in time to watch war break out in his country, but too early to be a genuine refugee. Indeed, Jozef’s typical answer to inquiries about his origins and ethnicity is, “I am complicated.”

And so he proves to be—not just to himself, but to the revolving series of shadowy but insightful narrators who chart his progress from Sarajevo to Chicago; from a hilarious encounter with the first President Bush to a somewhat more grave one with a heavily armed Serb whom he has been hired to serve with court papers. Moving, disquieting, and exhilarating in its virtuosity, Nowhere Man is the kaleidoscopic portrait of a magnetic young man stranded in America by the war in Bosnia.

Aleksandar Hemon is the author of The Question of Bruno, which appeared on Best Books of 2000 lists nationwide, won several literary awards, and was published in eighteen countries. Born in Sarajevo, Hemon arrived in Chicago in 1992, began writing in English in 1995, and now his work appears regularly in The New Yorker, Esquire, Granta, Paris Review, and Best American Short Stories.

"One of literature's most engaging lost young men since Augie March. . . . Hemon can't write a boring sentence, and the English language . . . is the richer for it." —The New York Times Book Review

“Hemon’s fractured story will haunt you long after you want it to, as you slowly realize that just because the last sentence ended with a period, all that was said before continues.” –Chicago Sun-Times