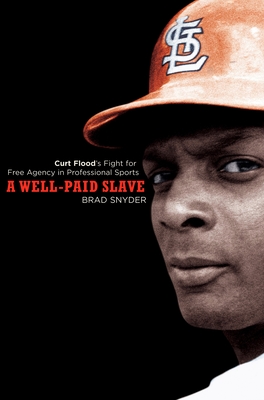 After the 1969 season, the St. Louis Cardinals traded their star center fielder, Curt Flood, to the Philadelphia Phillies, setting off a chain of events that would change professional sports forever. At the time there were no free agents, no no-trade clauses. When a player was traded, he had to report to his new team or retire. Unwilling to leave St. Louis and influenced by the civil rights movement, Flood chose to sue Major League Baseball for his freedom. His case reached the Supreme Court, where Flood ultimately lost. But by challenging the system, he created an atmosphere in which, just three years later, free agency became a reality. Flood’s decision cost him his career, but as this dramatic chronicle makes clear, his influence on sports history puts him in a league with Jackie Robinson and Muhammad Ali.

Brad Snyder’s writing has appeared in numerous publications, including The Baltimore Sun, The Washington Post, and the St. Petersburg Times. His previous book, Beyond the Shadow of the Senators, won the Robert Peterson Recognition Award from the Society for American Baseball Research (SABR) and was a finalist for SABR’s Seymour Medal, Spitball Magazine’s Casey Award, and Elysian Fields Quarterly’s Dave Moore Award. He is a graduate of Duke University and Yale Law School.