The Girl Who Sailed the Stars (Hardcover) 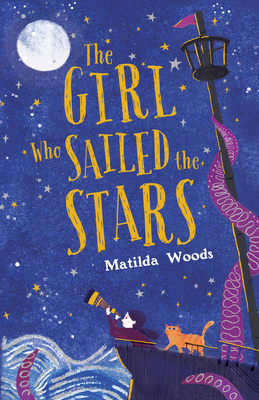 By Matilda Woods, Anuska Allepuz (Illustrator)
$16.99
On Our Shelves Now

— From Our Favorites of the Year 2019: Middle Grade

“You can’t lose with text by Matilda Woods and illustrations by Anuska Allepuz. It’s impossible not to love whatever magical thing they create, and The Girl Who Sailed the Stars is no exception. This book was whimsical and imaginative from page one, and I loved discovering new things alongside the curious and bold Oona—the sea cats are also a delightful part of this universe. Pick this one up as soon as you can!”
— Melissa Music, The Story Shop, Monroe, GA

Adventure, friendship, and magical realism come together in this heartwarming, whimsical story. Perfect for fans of A Snicker of Magic and The Penderwicks.

When Oona Britt was born in the magical town of Nordlor, where all of the homes are built from wrecked ships, her parents never expected her to be a girl. Having listened to a faulty prediction from a washed-up soothsayer, they were promised a "bold and brave son," so as the youngest of seven sisters, Oona's birth became a disappointment -- especially to her sea captain father, who doesn't believe there's a place for girls aboard ships.

But Oona is different from the rest of her family. She longs for adventure and knowledge. So she steals aboard her father's ship just as he's about to set sail for his annual winter whale hunt, and suddenly finds herself in the midst of a grand adventure! The ship has its own sea cat, Barnacles, and a navigator named Haroyld, who show Oona how to follow the stars. But for all that, Oona's father is furious. Can she prove to him that she's worth his love and pride, even though she's not the bold and brave son he was promised?

This follow-up to The Boy, the Bird & the Coffin Maker carries just as much heart and charm as Matilda Woods's first novel. The characters, story, and illustrations will dazzle readers.

Praise for The Girl Who Sailed the Stars:

"A richly imaginative fantasy that brings to mind Joan Aiken's Wolves Chronicles with a dash of Roald Dahl . . . Strong world-building joins lyrical prose and a fine leavening of humor, adventure, and magic, to make a winning combination." --SLJ

Praise for The Boy, the Bird & the Coffin Maker:

* "Woods has penned a gentle fable, one rich in hope that promotes the strength of kindness. Her magical realism nods to the like of Isabel Allende and Gabriel García Márquez, perfectly tailoring the genre for a middle-grade audience. Anuska Allepuz's whimsical illustrations add to the magical feel. Sweet, earnest and not to be missed." --Shelf Awareness, starred review

* "Elegantly told from start to finish and enhanced by Allepuz's evocative images and decorations, debut author Woods has created a fairy tale that will linger with readers." --Publishers Weekly, starred review

* "This uplifting book will enthrall readers, enveloping them in its gentle charm." --Booklist, starred review

Matilda Woods (www.matildawoods.com) grew up in the small town of Southern Tablelands, Australia. She graduated from Monash University with a Masters of Social Work. Matilda splits her time between writing middle grade fiction and working as a youth social worker. She is the author of The Boy, the Bird & the Coffin Maker, and she currently lives in the same small town where she grew up, with her four chickens, three dogs, two cats, and one bird. Follow her on Twitter @MatildaWrites.

Praise for The Girl Who Sailed the Stars:

"A richly imaginative fantasy that brings to mind Joan Aiken’s Wolves Chronicles with a dash of Roald Dahl . . . Strong world-building joins lyrical prose and a fine leavening of humor, adventure, and magic, to make a winning combination." --SLJ