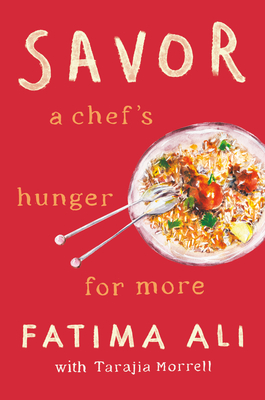 A young chef whose dreams were cut short savors every last minute as she explores food and adventure, illness and mortality in this stunning, lyrical memoir and family story that sweeps from Pakistan to New York City and beyond.

Fatima Ali won the hearts of viewers as the Fan Favorite of Bravo’s Top Chef in season fifteen. Twenty-nine years old, she was a dynamic, boundary-breaking chef and a bright new voice for change in the food world. After the taping wrapped and before the show aired, Fati was diagnosed with a rare form of bone cancer. Not one to ever slow down or admit defeat, the star chef vowed to spend her final year traveling the world, eating delicious food, and making memories with her loved ones. But when her condition abruptly worsened, her plans were sidelined. She pivoted, determined to make her final days count as she worked to tell the story of a brown girl chef who set out to make a name for herself, her food, and her culture.

Including writing from Fatima during her last months and contributions by her mother, Farezeh, and her collaborator, Tarajia Morrell, this deftly woven account is an inspiring ode to the food, family, and countries Fatima loved so much. Alternating between past and present, readers are transported back to Pakistan and the childhoods of both Fatima and Farezeh, each deeply affected by cultural barriers that shaped the course of their lives. From the rustic stalls of the outdoor markets of Karachi to the kitchen and dining room of Meadowood, the acclaimed three-star Michelin restaurant where she apprenticed, Fati reflects on her life and her identity as a chef, a daughter, and a queer woman butting up against traditional views.

This triumphant memoir is at once an exploration of the sense of wonder that made Fatima so special, and a shining testament to the resilience of the human spirit. At its core, it is a story about what it means to truly live, a profound and exquisite portrait of savoring every moment.

Born in Pakistan, Fatima Ali was a chef in New York City. She received her education from the Culinary Institute of America and, at the age of twenty-three, competed in and won an episode of Chopped on the Food Network. Ali was a contestant on the fifteenth season of Bravo’s Top Chef, where she was voted Fan Favorite. She wrote several essays for Bon Appétit, one of which was posthumously awarded a James Beard Award after she passed away in January 2019.

Tarajia Morrell is a native New Yorker who grew up at the table. In 2011, Morrell created the food and travel blog The Lovage. Her reporting and essays have since appeared in WSJ. magazine, T Magazine, Food & Wine, Departures, and Cherry Bombe, among others. Morrell is also the author of Soul of New York: A Guide to 30 Exceptional Experiences. She lives in Manhattan with her daughter.

“An exceptional account of the life of an exceptional woman, so talented and gone too soon. Savor is moving, heartbreaking, and defiantly hopeful.”—Mohsin Hamid, New York Times bestselling author of The Last White Man and Exit West