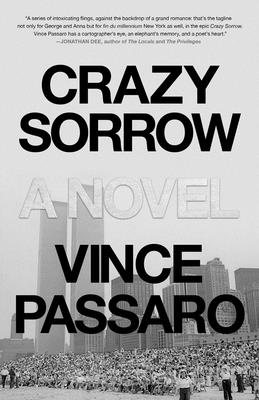 A lyrical novel, spanning four decades in New York City, about a couple torn apart and the lengths to which they will go to be reunited.

Vince Passaro’s first novel, 2002’s Violence, Nudity, Adult Content, was a provocative book that explored the darkest human emotions and the traumas of mental illness, sexual assault, and murder. Now, nearly twenty years later, Passaro is back with his follow-up, Crazy Sorrow, a novel that is equally explosive and more grand in scope.

The story opens in the shadow of the new World Trade Center, on July 4, 1976, when students George and Anna meet on the weed- and wine-fueled night of the nation’s Bicentennial celebration. George, haunted by his upbringing, instantly falls for the sensual, magnetic Anna. Soon, they couple up, dropping acid, swapping music, exploring the city and each other. Yet their romance is short-lived, and they go their own ways.

Passaro chronicles the next four decades, following George and Anna through their various relationships, their sex lives both youthful and mature, their failed marriages, and the travails of parenthood and their careers. Yet as the years go by one thing remains constant: the former lovers wonder what happened to each other. Finally, miraculously, they reconnect as the new century is beginning, only to discover that history itself will have a say in whether they can stay together.

Crazy Sorrow is an ambitious examination of the forces that draw people together and drive them apart—yet it also expands beyond the points of view of its characters to capture the movement of time and to reveal a living, breathing New York that is both constantly changing and always familiar. Crazy Sorrow stands as Passaro’s powerful love letter to his characters and to the city that has shaped them.

Vince Passaro is the author of the novel Crazy Sorrow. His criticism and essays have appeared in many prominent publications, including Harper’s Magazine, of which he is a contributing editor, The Nation, The New York Times Sunday Magazine, The New York Times Book Review, Elle, Salon, and others, along with short fiction in such national magazines and literary journals as Esquire, GQ, Open City, Agni, Story, Boulevard, and Quarterly West. His first book, Violence, Nudity, Adult Content: A Novel, was published in 2002. He lives a few miles north of New York City in an old Huguenot town with his wife, son, and a smattering of film cameras, fountain pens, and other fellow-traveling refuse from the mid-20th century.

"[I]ntelligent, serious and unapologetically explicit. . . gorgeously written; it frequently evokes the texture of the city with precision and artfulness; the perspective it brings to bear is both large-minded and discerning . . . What Passaro has done well in Crazy Sorrow is evoke…a vanished time and place—the mood on that gritty landfill off the financial district in 1976." —Adelle Waldman, New York Times

“Passaro writes exquisitely at every turn, narrating with an engaging worldly-wise tone.”—Kirkus Reviews

“In Passaro’s ambitious second novel, four decades of American life are explored through two characters who meet on July 4, 1976, as America celebrates its bicentennial. Filled with memorable scenes and characters, this has plenty of pithy things to say about sex, love, and relationships. The result is as thought-provoking as it is entertaining.”—Publishers Weekly

"[Passaro] has big ambitions here…[he] deftly captures the changing of eras, how it sneaks up on us… Passaro can write, his prose often starkly incisive." —Douglas Perry, The Oregonian

“A series of intoxicating flings, against the backdrop of a grand romance: That’s the tagline not only for George and Anna but for fin du millennium New York as well, in the epic Crazy Sorrow. Vince Passaro has a cartographer’s eye, an elephant’s memory, and a poet’s heart.”—Jonathan Dee, author of The Locals and The Privileges

"Crazy Sorrow is a celebration of vitality and intimacy: a comprehensively compelling sexual and emotional history of a pair of star-crossed lovers and of a New York that’s now gone.  In its clear-eyed examination of the contours of desire, it tracks our complicity in the destruction of what we most cherish and the loss of our hope in those American principles that were still alive for us during the Bicentennial. The result is both a commemoration of the joy and possibility of what was and a lament for a lost world."—Jim Shepard, author of Phase Six