The Crying Tree: A Novel (Paperback) 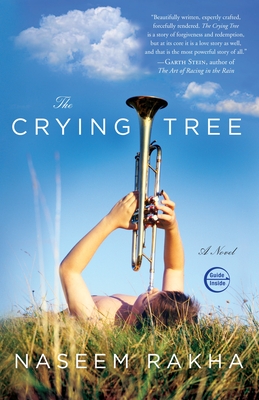 Dramatic, wrenching, and ultimately uplifting, The Crying Tree is an unforgettable story of love and redemption, the unbreakable bonds of family, and the transformative power of forgiveness in the wake of a tragedy.

Shortly after Irene and Nate Stanley move to Oregon with their two children, Bliss and Shep, the unthinkable happens: Fifteen-year-old Shep is shot and killed during an apparent robbery in their home. The murderer, a young mechanic with a history of assault, robbery, and drug-related offenses, is caught and sentenced to death.

Shep’s murder sends the Stanley family into a tailspin, with each member attempting to cope with the tragedy in his or her own way. Irene lives week after week, waiting for Daniel Robbin’s execution and the justice she feels she and her family deserve. The weeks turn into months and then years. Ultimately, faced with a growing sense that Robbin’s death will not stop her pain, Irene takes the extraordinary and clandestine step of reaching out to her son’s killer.

Years later, Irene receives the notice that she had craved for so long—Daniel Robbin has stopped his appeals and will be executed within a month. This announcement shakes the very core of the Stanley family. Irene, it turns out, isn’t the only one with a shocking secret to hide. And as the execution date nears, the Stanleys must face difficult truths to find a way to come to terms with the past.

NASEEM RAKHA is an award-winning broadcast journalist whose stories have been heard on NPR. She lives in Oregon’s Willamette Valley.

"Beautifully written, expertly crafted, forcefully rendered. Naseem Rakha lays bare all the ambiguities and nuances of our culture in a story that is compelling and deep. The Crying Tree is a story of forgiveness and redemption, but at its core it is a love story as well, and that is the most powerful story of all."
--Garth Stein, author of The Art of Racing in the Rain

In The Crying Tree Naseem Rakha uses grace and honesty to tell the gripping story of parents losing a son to murder and their desperate hope that an execution will provide closure, while allowing readers to consider the idea of forgiveness as a means of healing.
--Randy Susan Meyers, author The Murderer's Daughters

Naseem Rakha writes with both clarity and sympathy about one of the most mysterious and evasive of human impulses: forgiveness. The Crying Tree is a memorable and deeply humane novel.
--Jon Clinch, author Finn and Kings of Earth

This complex, layered story of a family's journey toward justice and forgiveness comes together through spellbinding storytelling. Deputy sheriff Nate Stanley calls home one day and announces he's accepted a deputy post in Oregon. His wife, Irene, resents having to uproot herself and their children, Shep and Bliss, from their small Illinois town, but Nate insists it's for the best. Once they've moved into their new home, Shep sets off to explore Oregon's outdoors, and things seem to be settling in nicely until one afternoon when Nate returns home to find his 15-year-old son beaten and shot in their kitchen. After Shep dies in Nate's arms, the family seeks vengeance against the young man, Daniel Joseph Robbin, accused of Shep's murder. In the 19 years between Shep's death and Daniel's legal execution, Bliss becomes all but a caretaker for her damaged parents, and a crisis pushes Irene toward the truth about what happened to Shep. Most of the big secret is fairly apparent early on, so it's a testament to Rakha's ability to create wonderfully realized characters that the narrative retains its tension to the end.--Publishers Weekly

A more common name for the "crying tree" is the willow, and one grows near Steven (Shep) Stanley's grave in Blaine, OR. This 15-year-old was killed in his home, and his best friend, Daniel, has been found guilty of the crime and waits a lethal injection on death row. Gifted musician Shep was definitely the center of the world for his mother, Irene, and the intensity of her grief is exquisitely portrayed in this moving, unsentimental tale of loss. After years of severe depression, withdrawal from her family, and alcoholism, Irene comes to realize that if she does not forgive her son's killer she will be destroyed. She secretly writes to Daniel in prison, and they begin corresponding. Then Irene receives written notice of the execution date and knows she must act. VERDICT Gifted storyteller Rakha has crafted a beautiful and passionate novel that never becomes maudlin or unbelievable. All of the characters are genuinely human, and the author even manages to save a few surprising plot details to the end. Highly recommended, especially for readers interested in the subject of loss and coping.- Library Journal

"Rakha writes of one of her central subjects, 'and it wasn't anything she knew how to handle.' Not so for the author, who has crafted not only a compelling read, but one whose message lingers: At what point does that to which we cling for our survival become the very thing that robs us of our life?"–The Oregonian

"The Crying Tree is a powerful novel full of moral questions as well as surprises. Like real life, there are no easy roads for these characters, but they make their way, one step at a time."–Las Vegas Review-Journal

"The Crying Tree is hauntingly beautiful and sad as Rakha examines themes of hate, forgiveness, redemption, acceptance and love. Here, Rakha brings hard questions for which there are no black-and-white answers to the fore. Readers are forced to question their own beliefs as Rakha's characters delve into their own."–Deseret News


"This is a gripping, well-paced tale, compassionate without being mawkish." -The Guardian