Hutch: Baseball's Fred Hutchinson and a Legacy of Courage (Paperback) 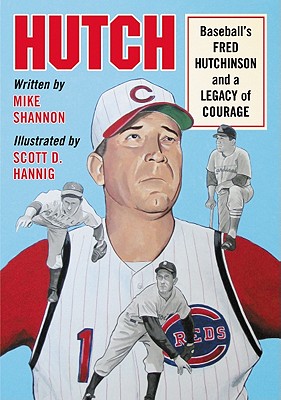 This is a graphic biography of Fred Hutchinson, one of baseball's most beloved men. Hutch enjoyed a successful big league career, first as an All-Star pitcher for the Tigers and later as a pennant-winning manager with the Reds. And he is remembered for his final major league summer and a season he didn't finish. In the winter of 1963, after three straight winning seasons as manager of the Reds, Hutchinson was diagnosed with cancer. The former Navy man chose to stay on as manager for as long as he could. Steadily worsening, he guided the club through spring training and the first four months of the regular season. He was hospitalized in late July but after little more than a week he returned for another nine games as the 1964 pennant chase heated up. After relinquishing his post in mid-August, he returned to spend the final day of the season with his team, whose postseason hopes had come down to the final weekend. He died just over a month later. Major League Baseball has given the Hutch Award every year since 1965, honoring the player who exhibits the courage, dedication and competitiveness of Fred Hutchinson.

Mike Shannon is the co-founder and current editor-in-chief of Spitball magazine. The author of more than a dozen baseball books, he lives in Cincinnati. Illustrator Scott Hannig began his career as a baseball illustrator by painting portraits of players from the Big Red Machine. He is a lifelong Reds fan and lives in Miamisburg, Ohio.