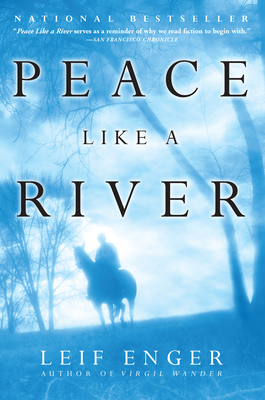 Leif Enger's debut novel, Peace Like A River, was launched to critical acclaim in 2001 and went on to sell over one million copies. Now a perennial, best-selling American classic, it is at once a heroic quest, a tragedy, and a love story, in which "there is magic... none more potent that Leif Enger's prose" (Newsday). Enger brings us eleven-year-old Reuben Land, an asthmatic boy in the Midwest who has reason to believe in miracles. Along with his sister and father, Reuben finds himself on a cross-country search for his outlaw older brother who has been charged with murder. Their journey unfolds like a revelation, and its conclusion shows how family, love, and faith can stand up to the most terrifying of enemies, and the most tragic of fates.

LEIF ENGER was raised in Osakis, Minnesota, and worked as a reporter and producer for Minnesota Public Radio before writing his bestselling debut novel Peace Like a River, which won the Independent Publisher Book Award and was one of the Los Angeles Times and Time Magazine's Best Books of the Year. He is also the author of So Brave, Young, and Handsome and Virgil Wander. He and his wife Robin live in Minnesota.