Pitchers of Beer: The Story of the Seattle Rainiers (Hardcover) 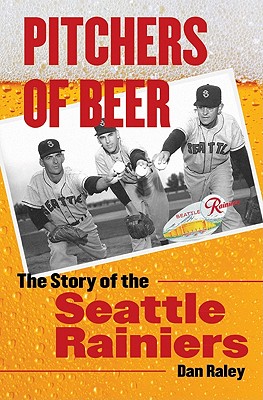 In 1937, when local beer baron Emil Sick stepped in, the Seattle Indians were a struggling minor-league baseball team teetering on collapse. Moved to mix baseball and beer by his good friend and fellow brewer, New York Yankees owner Jacob Ruppert, Sick built a new stadium and turned the team into a civic treasure. The Rainiers (newly named after the beer) set attendance records and won Pacific Coast League titles in 1939, ’40, ’41, ’51, and ’55.   The story of the Rainiers spans the end of the Great Depression, World War II, the rise of the airline industry, and the incursion of Major League Baseball into the West Coast (which ultimately spelled doom for the club). It features well-known personalities such as Babe Ruth, who made an unsuccessful bid to manage the team; Hall of Famer Rogers Hornsby, who did manage the Rainiers; and Ron Santo, a batboy who went on to a storied career with the Chicago Cubs. Mixing traditional baseball lore with tales of mischief, Pitchers of Beer relates the twenty-seven-year history of the Rainiers, a history that captures the timeless appeal of baseball, along with the local moments and minutiae that bring the game home to each and every one of us. Pitchers of Beer showcases fifty-two photographs of players and memorabilia from noted Northwest baseball collector David Eskenazi.

Dan Raley is an editor with the Atlanta Journal-Constitution. Previously, he was a sports writer for the Seattle Post-Intelligencer for nearly three decades and he has won over fifty national and regional writing awards. He is also the author of Tideflats to Tomorrow: The History of Seattle’s SoDo.

"I'd recommend Pitchers of Beer highly to anyone who wants a well-written, well-documented history of what still stands for many as the true Golden Age of Seattle Baseball."—Arne Christensen, Seamheads.com

"Raley would concede as another season approaches that his and other good sports books can't be better than real baseball. Pitchers of Beer and its ilk, however, certainly can make real baseball seem better."—Mike Henderson, Crosscut.com

"Dan Raley . . . put his research and storytelling skills to good use in Pitchers of Beer: The Story of the Seattle Rainiers."—Jeff Baker, Oregonian

"For those who love the game of baseball for the game and the characters that have played throughout its history, this book will be a delight. If readers have fond memories of hometown teams, this book may cause them to walk down memory lane themselves." — Leslie Heaphy, Arete

"Raley brings these characters back to life with deft storytelling and very readable text. The result is a rich team history that will rekindle long-forgotten memories for old Rainiers enthusiasts."—James Bailey, Baseball America

"A very impressive effort for a city that you'd never think could sustain such a history of a game played between rain delays. Don't forget to bring an umbrella as you read this. You could get washed away in nostalgia."—Tom Hoffarth, Los Angeles Daily News

"In Pitchers of Beer: The Story of the Seattle Rainiers . . . Dan Raley recounts how the team became one of the most popular in the PCL, with home-grown heroes like Fred Hutchinson and Edo Vanni and well-known stars like Rogers Hornsby and Johnny Pesky providing fodder for a breezy but well-researched narrative."—Jerry Milani, Baseball Digest