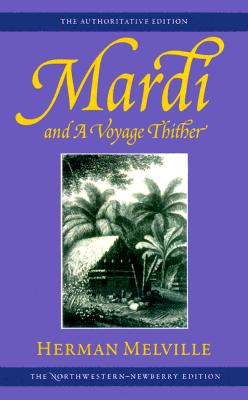 By Herman Melville
Email or call for price
Special Order

Presented as narratives of his own South Sea experiences, Melville's first two books had roused incredulity in many readers. Their disbelief, he declared, had been "the main inducement" in altering his plan for his third book, Mardi: and a Voyage Thither (1849). Melville wanted to exploit the "rich poetical material" of Polynesia and also to escape feeling "irked, cramped, & fettered" by a narrative of facts. "I began to feel . . . a longing to plume my pinions for a flight," he told his English publisher.

Mardi began as a sequel to Typee (1846) and Omoo (1847), but changed radically while he was writing it and emerged as an altogether independent and original work. In its combination of adventure, allegorical romance, realistic portraits of characters and scenes from nature, philosophical speculation, and travelogue-satire, Mardi was Melville's first attempt to create a great work of fiction.

This edition of is an Approved Text of the Center for Editions of American Authors (Modern Language Association of America).

Herman Melville (August 1, 1819 – September 28, 1891) was an American novelist, short story writer, essayist, and poet. He is best known for his novel Moby-Dick. His first three books gained much contemporary attention (the first, Typee, becoming a bestseller), and after a fast-blooming literary success in the late 1840s, his popularity declined precipitously in the mid-1850s and never recovered during his lifetime. When he died in 1891, he was almost completely forgotten. It was not until the "Melville Revival" in the early twentieth century that his work won recognition, especially Moby-Dick, which was hailed as one of the literary masterpieces of both American and world literature. He was the first writer to have his works collected and published by the Library of America.