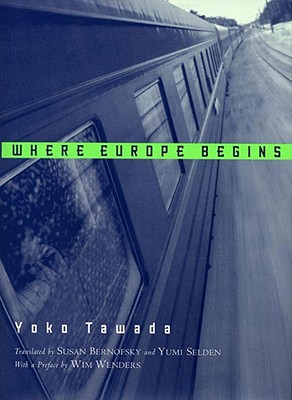 A gorgeous collection of fantastic and dreamlike tales by one of the world's most innovative contemporary writers.

Chosen as a 2005 Times Literary Supplement Book of the Year, Where Europe Begins has been described by the Russian literary phenomenon Victor Pelevin as "a spectacular journey through a world of colliding languages and multiplying cities." In these stories' disparate settings—Japan, Siberia, Russia, and Germany—the reader becomes as much a foreigner as the author, or the figures that fill this book: the ghost of a burned woman, a traveler on the Trans-Siberian railroad, a mechanical doll, a tongue, a monk who leaps into his own reflection. Through the timeless art of storytelling, Yoko Tawada discloses the virtues of bewilderment, estrangement, and Hilaritas: the goddess of rejoicing.

Yoko Tawada was born in Tokyo in 1960, moved to Hamburg when she was twenty-two, and then to Berlin in 2006. She writes in both Japanese and German and has received the Akutagawa, Lessing, Kleist, Noma, Adelbert von Chamisso and Tanizaki prizes as well as the Goethe Medal. In 2018 her novel The Emissary won the National Book Award.

Susan Bernofsky is the acclaimed translator of Hermann Hesse, Robert Walser, and Jenny Erpenbeck, and the recipient of many awards, including the Helen and Kurt Wolff Prize and the Hermann Hesse Translation Prize. She teaches literary translation at Columbia University and lives in New York.

An undeniably superb, even breathtaking short story collection about life spent in the in-between by the Japanese-born, German-domiciled, multi-dimensioned Tawada.
— Asian Week

Tawada's slender accounts of alienation achieve a remarkable potency. Each one sustains a masterly balance between the tenuous but meaningful connections of dreams and the direct, earthy storytelling of folk tales.
— The New York Times

A spectacular journey through a world of colliding languages and multiplying cities.
— Victor Pelevin

Only the most profound reverence, I felt, could do justice to this writer and this work.
— Wim Wenders

In Tawada's work, one has the feeling of having wandered into a mythology that is not one's own.
— Rivka Galchen - The New Yorker