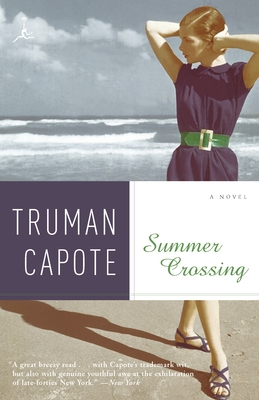 Thought to be lost for over 50 years, here is the first novel by one of the greatest American writers of the 20th century.

Set in New York during the summer of 1945, this is the story of a young carefree socialite, Grady, who must make serious decisions about the romance she is dangerously pursuing and the effect it will have on everyone involved.

Fans of Breakfast at Tiffany’s and Capote’s short stories will be thrilled to read Summer Crossing.

Truman Capote was a native of New Orleans, where he was born on September 30, 1924. His first novel, Other Voices, Other Rooms, was an international literary success when first published in 1948, and accorded the author a prominent place among the writers of America's postwar generation. He sustained this position subsequently with short-story collections (A Tree of Night, among others), novels and novellas (The Grass Harp and Breakfast at Tiffany's), some of the best travel writing of our time (Local Color), profiles and reportage that appeared originally in The New Yorker (The Duke in His Domain and The Muses Are Heard), a true-crime masterpiece (In Cold Blood), several short memiors about his childhood in the South (A Christmas Memory, The Thanksgiving Visitor, and One Christmas), two plays (The Grass Harp and House of Flowers and two films (Beat the devil and The Innocents).

Mr. Capote twice won the O.Henry Memorial Short Story Prize and was a member of the National Institute of Arts and Letters. He died in August 1984, shortly before his sixtieth birthday.

"Truman Capote is the most perfect writer of my generation."
-Norman Mailer