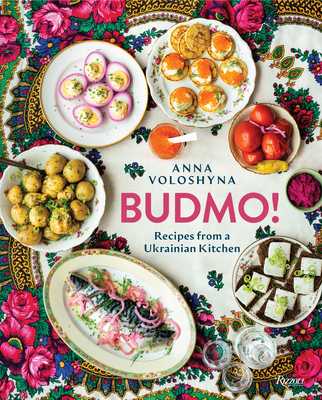 With its emphasis on fresh ingredients, time-honored heritage, and warm hospitality, Eastern European cuisine is having a culinary moment, in addition to Ukraine being of great current interest.

Meaning “cheers!” in Ukrainian, Budmo! is the first cookbook to celebrate classic Eastern European recipes with a modern, creative twist. Presented by Ukrainian-born, California-based chef, blogger, and culinary instructor Anna Voloshyna, bright flavors and vibrant ingredients sing from each plate. A gorgeous magenta pkhali comes alive with roasted beets and a tangy pomegranate molasses. Borscht is reinvented with green sorrels and semi-soft eggs. And Voloshyna even shares a personal recipe for her Ukrainian grandmother’s duck—roasted to a delicious crispy-brown perfection. These are the dishes that are perfect for gathering your favorite people with, and each one is bound to uncover the mouthwatering flavors and traditions of this endlessly fascinating part of the world.

Anna Voloshyna was born in southern Ukraine in 1990 and relocated to the United States in 2011. She is a chef, blogger, and culinary instructor who translates Eastern European cuisine and flavors into approachable dishes for the modern home cook, and is particularly known for her wildly successful pop-up dinners and workshops. She resides with her husband in the San Francisco Bay Area.

"Ten Best Books About Food of 2022: In this colorful cookbook you’ll find recipes for dishes like cold borscht, dark cherry varenyky and sweet pumpkin rice kasha from Ukrainian native Anna Voloshyna, who moved to California in 2011. Known for hosting pop-up dinners and cooking classes, Voloshyna is also a food stylist, photographer and blogger. In her debut cookbook, she offers modern and American spins on the typical dishes she grew up with, and she also includes details like food origins, customs and traditions in each recipe’s headnote. Budmo, which is how Ukrainians say “cheers,” shares the country’s complicated history that has led up to the current war, while simultaneously celebrating its varied and vibrant cuisine." —SMITHSONIAN.COM

"While all these books were written by expats in the U.S. and U.K. and went to press before the Ukraine conflict began, the backdrop of that struggle is now inescapable. “Taking away our food and turning it into one big gray mass has always been one of the ways the Soviets tried to control our people, so it really does feel more urgent than ever to protect our voice and culinary culture,” said Anna Voloshyna, the San Francisco chef and author of “Budmo: Recipes from a Ukrainian Kitchen” (October, Rizzoli). Recipes like dark cherry varenyky honor those traditions, but after more than a decade of living in California, Ms. Voloshyna is also excited to share dishes like a golden beet and pickled onion riff on Ukrainian vinegret salad that reflects the bounty of her adopted home." —WALL STREET JOURNAL

"No one went to restaurants after the collapse of the USSR in 1991 because there weren’t any, writes San Francisco-based food writer Anna Voloshyna, who was born and raised in the Ukraine. Even so, Ukrainian home cooks churned out restaurant-caliber recipes, such as pickled mussels, green sorrel borscht, and khachapuri. In a jam-packed introduction, Voloshyna summarizes the country’s complicated history and provides a handy pantry section and glossary. “Budmo!” means “cheers!’ in Ukrainian, yet the direct translation means “let us be,” a phrase that has deeper meaning with the ongoing war in Ukraine." —PLATE MAGAZINE

"Summer preview: Budmo!, meaning "cheers” in Ukrainian, is an innovative approach to classic Eastern European cooking. Ukrainian-born, California-based chef, blogger, and culinary instructor Anna Voloshyna hones in on the fresh ingredients, time-honored heritage, and warm hospitality that define Ukrainian cuisine. She’s an expert in taking the dishes she grew up with to their modern iteration, reinventing borscht with green sorrels and semi-soft eggs or turning pkhali magenta with roasted beets and a tangy pomegranate molasses." —THRILLIST

". . .a love letter to Eastern European food, especially that of Ukraine." —7X7

"At the age of 21, Voloshyna emigrated from Ukraine to the United States, where she became a food stylist and photographer and started pop-up dinners to share food traditions from her childhood. The wild success of her cooking led to this debut cookbook, which is an informative and delicious glimpse into her culinary memories. It is rich with history and descriptions of present-day culture that define the influences on Ukraine and its Eastern European neighbors. Dishes are traditional and cover a variety of soups, kashas, and mains as well as breads, crepes, and dumplings. The introductions to each include recipe pairings, food origins, and customs surrounding the dish. Helpful notes have variations and tips to make recipes practical for weeknight preparation. Voloshyna also includes a language primer and a list of her pantry staples. Her photographs convey the rustic warmth and beauty of her Ukrainian cooking...VERDICT: This timely cookbook is strongly recommended and provides a balance of the cultural history of Ukraine and Eastern Europe with the warmth and love found in Voloshyna’s delicious recipes." —LIBRARY JOURNAL