American Smoke: Journeys to the End of the Light (Paperback) 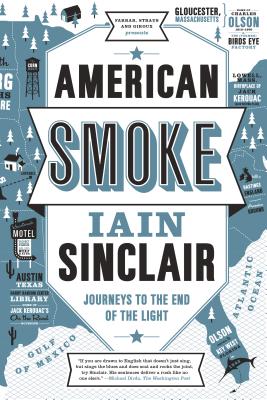 "How best to describe Iain Sinclair?" asks Robert Macfarlane in The Guardian. "A literary mud-larker and tip-picker? A Travelodge tramp (his phrase)? A middle-class dropout with a gift for bullshit (also his phrase)? A toxicologist of the twenty-first-century landscape? A historian of countercultures and occulted pasts? An intemperate WALL-E, compulsively collecting and compacting the city's textual waste? A psycho-geographer (from which term Sinclair has been rowing away ever since he helped launch it into the mainstream)? He's all of these, and more."
Now, for the first time, the enigma that is Iain Sinclair lands on American shores for his long-awaited engagement with the memory-filled landscapes of the American Beats and their fellow travelers.
A book filled with bad journeys and fated decisions, American Smoke is an epic walk in the footsteps of Malcolm Lowry, Charles Olson, Jack Kerouac, William Burroughs, Gary Snyder, and others, heated by obsession (the Old West, volcanoes, Mexico) and enlivened by false memories, broken reports, and strange adventures.
With American Smoke, Sinclair confirms his place as the most innovative of our chroniclers of the contemporary.

Iain Sinclair is the author of many books, including Downriver, Lights Out for the Territory, London Orbital, and Hackney, That Rose- Red Empire. He lives in Hackney, East London.

“When I opened Iain Sinclair's American Smoke I felt something very different. Here is a style both measured and sumptuously wild--a beautiful, obsessive and individual style--and it's the right weapon for attacking a monumental task: visiting American towns and landscapes associated with the Beats and the writers and poets in their orbit.” —Lawrence Osborne, The New York Times Book Review

“If you ever feel that plain E.B. White/George Orwell transparent style is--whisper it softly--really kind of flat and boring, try Sinclair. If you are drawn to English that doesn't just sing, but sings the blues and scats and rocks the joint, try Sinclair. His sentences deliver a rush like no one else's. American Smoke . . . is certainly a head trip worth taking.” —Michael Dirda, The Washington Post

“One of Sinclair's greatest skills has always been his ability to take diverse if not chaotic source material and refashion it in a way that sometimes seems downright alchemical. Once Sinclair starts making connections he finds them everywhere . . . But what ultimately makes the book come together is Sinclair's tough but malleable sensibility, expressed through a prose style that's hard-edged, inventive, often wildly extravagant.” —Geoff Nicholson, The Los Angeles Times

“Sinclair's is a prolix poetics, an amassing of noun-hives whose compacted wit would make the most lexically dexterous rapper envious . . . his writing can be an imagistic seance-stream full of startling riffs, memory sifts, domino-effect associationism.” —Sukhdev Sandhu, The Observer

“Sinclair's bad journeys and higher gossip and spiritual puns bring us not only to the end of the light but to the wild edges of beauty.” —Baynard Woods, Baltimore City Paper

“What Sinclair delivers is not just a stunning evocation of the landscapes of America . . . but a precise aetiology of what made him the writer he is. I would recommend this book to every creative writing student in the country.” —Stuart Kelly, The Scotsman

“Taut, endlessly fertile prose . . . In American Smoke [Sinclair's] voice is still urgent; it still has things to tell us. Of we know what's good for us, we'll listen.” —Jon Day, Financial Times

“Inventive, dazzling, arresting. A superb chronicle of an impossible dream that has descended to a nightmare.” —New Statesman on Ghost Milk