Who Was Changed and Who Was Dead (Paperback) 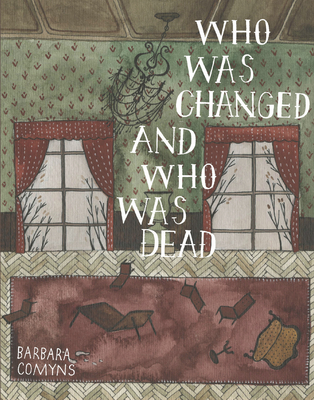 “Comyns’ novel is deranged in ways that shouldn’t be disclosed.” —Ben Marcus

This is the story of the Willoweed family and the English village in which they live. It begins mid-flood, ducks swimming in the drawing-room windows, “quacking their approval” as they sail around the room. “What about my rose beds?” demands Grandmother Willoweed. Her son shouts down her ear-trumpet that the garden is submerged, dead animals everywhere, she will be lucky to get a bunch. Then the miller drowns himself . . . then the butcher slits his throat . . . and a series of gruesome deaths plagues the villagers. The newspaper asks, “Who will be smitten by this fatal madness next?” Through it all, Comyns' unique voice weaves a text as wonderful as it is horrible, as beautiful as it is cruel. Originally published in England in 1954, this “overlooked small masterpiece” is a twisted, tragicomic gem.

Barbara Comyns was born in England in 1909 and raised in a Warwickshire country house. She and her siblings were largely in the care of governesses, and allowed to run wild. She began writing and illustrating her work when she was a girl. In her teens she attended art school in London. She then married a painter and had two children. To support her family, she dealt in antiques and vintage cars, renovated apartments, and bred poodles. She later lived in Spain for eighteen years. In addition to writing, she was an accomplished painter and exhibited with the London Group. She died in 1992, leaving two children, several grandchildren and great-grandchildren, and eleven books.

Brian Evenson is the author of more than a dozen books of fiction. His novel Last Days won the American Library Association’s award for Best Horror Novel of 2009. His novel The Open Curtain (Coffee House Press) was a finalist for an Edgar Award and an International Horror Guild Award. He has translated work by Christian Gailly, Jean Frémon, Claro, Jacques Jouet, Eric Chevillard, Antoine Volodine, Manuela Draeger, and David B. He is the recipient of three O. Henry Prizes as well as an NEA fellowship. His work has been translated into French, Italian, Greek Japanese, Persian, Russia, Spanish, Slovenian, and Turkish. He lives in Los Angeles and teaches in the Critical Studies Program at CalArts.

“Tragic, comic and completely bonkers all in one, I’d go as far as to call her something of a neglected genius.” —The Guardian

“Comyns’s own witchy way of looking at the world arises from her resourceful craft—her wordsmithery—which like a spell or a charm gives her fiction a unique flavor, and has won her a cult following.” —Marina Warner

“Comyns is one of those writers you can barely believe ever goes out of print. Her books are so funny, so exact, so twisted, you imagine their appeal would last for generations. Luckily for us, Who Was Changed and Who Was Dead, originally published in 1954, has been rescued by the new publishing project Dorothy.” —Jessa Crispin, PBS

“An aberrant pastoral as smart as this one could only come from someone with a biography as nutty and wonderful as Comyns’s.” —Nicole Rudick, The Paris Review Daily

“Who Was Changed and Who Was Dead keeps the reader guessing by freely switching point-of-view characters, flowing in and out of characters’ heads from paragraph to paragraph in a way that makes a small town haunted by mysterious illness feel like one infected organism. . . . Thanks to NYRB and the Dorothy Project, Comyns’ days of being underrated in America are over.” —Chicago Tribune

“The reason the censors might once have been afraid of this book is the reason we should rejoice in its publication: In Comyns’s lack of moralizing is freedom for the reader, and from that freedom comes change, including an increase in moral complexity, intellectual range, and truest empathy.” —PEN America

“The real trippiness of the novel—about an English village struck by a mysterious epidemic—lies not just in its eye-rubbingly bright details, but also in its moral sensibility. Flood, fire, madness descend on Comyns’s characters without any of the usual narratorial handwringing, occasionally accompanied by ducks. Comyns is so matter-of-fact as to be surreal, and irresistible.” —Lorin Stein, The Paris Review Daily