The Tutor: A Novel (Paperback) 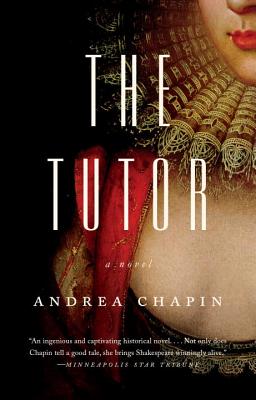 By Andrea Chapin
$16.00
Email or call for price

A bold and captivating novel about love, passion, and ambition that imagines the muse of William Shakespeare and the tumultuous year they spend together.

The year is 1590, and Queen Elizabeth’s Spanish Armada victory has done nothing to quell her brutal persecution of the English Catholics. Katharine de L’Isle is living at Lufanwal Hall, the manor of her uncle, Sir Edward. Taught by her cherished uncle to read when a child, Katharine is now a thirty-one-year-old widow. She has resigned herself to a life of reading and keeping company with her cousins and their children. But all that changes when the family’s priest, who had been performing Catholic services in secret, is found murdered. Faced with threats of imprisonment and death, Sir Edward is forced to flee the country, leaving Katharine adrift in a household rife with turmoil.

At this time of unrest, a new schoolmaster arrives from Stratford, a man named William Shakespeare. Coarse, quick-witted, and brazenly flirtatious, Shakespeare swiftly disrupts what fragile peace there is left at Lufanwal. Katharine is at first appalled by the boldness of this new tutor, but when she learns he is a poet, and one of talent, things between them begin to shift, and soon Katharine finds herself drawn into Shakespeare’s verse, and his life, in ways that will change her forever.

Inventive and absorbing, The Tutor is a masterful work of historical fiction, casting Shakespeare in a light we’ve never seen.

Andrea Chapin has been an editor at art, movie, theater, and literary magazines, including The Paris Review, Conjunctions, and The Lincoln Center Theater Review. She has written for such publications as More, Redbook, Town & Country, Self, Martha Stewart Living, and others. Chapin lives in Brooklyn with her husband and two children.

"When young William Shakespeare (an actor and aspiring poet) begins work as a tutor for a wealthy Catholic family, a well-read widow becomes his muse—and his editor, too. As Will's editrix falls under th espell of his pretty words, a question lingers: Is he sincere, or just a gifted player? Chapin's debut captivates, and it's her subplots of screaming witches and unsolved priest murders—not the Bard's fledgling verse—that keep the novel afloat."—Entertainment Weekly

“An ingenious and captivating historical novel. . . . Not only does Chapin tell a good tale, she brings Shakespeare winningly alive to display ‘the curious, brilliant alchemy of his mind.’ ”—Minneapolis Star Tribune

"Hugely enjoyable, The Tutor is erudite and emotionally intelligent, and the Shakespeare who emerges from the pages may be unexpected, but feels absolutely authentic."—The Daily Mail

“This is about [Shakespeare and Katherine’s] romance and how it funnels into his poem ‘Venus and Adonis.’ It’s completely wonderful and fun to imagine what happened [during Shakespeare’s lost years].”—NBC News, Weekend Today in New York

"With all the fire and spark of the best romance novels but the detail and weight of finely rendered historical fiction, debut novelist Chapin has crafted a fascinating and masterly background to Shakespeare’s first published work, the narrative poem Venus and Adonis."—Library Journal

"Upon discovering that the new tutor at her family’s manor, Will, is a poet, 31-year-old widow Katharine finds that her own love of words attracts her to young Mr. Shakespeare. As they feverishly collaborate on Venus and Adonis amid tragedies that befall the family, the widow begins to wonder if he truly loves her or is more passionate about her contribution to his writing. In addition to following the romance, this richly layered narrative explores the dynamics of a noble Catholic family facing persecution from Protestant Queen Elizabeth and portrays the circumscribed world of gowns and needlework that Katharine seeks to escape through literature. Chapin’s Shakespeare is hypnotic, with piercing eyes and a quicksilver tongue, boisterous but at times appealingly uncertain about his writing. This impressive debut, sprinkled with nods to Shakespeare’s later work, presents a fully realized account of how the glover’s son embarked on his writing career."—Booklist

"It’s always thrilling when a new novelist marches into familiar territory and delivers something refreshingly different. In this case, Andrea Chapin presents a story of William Shakespeare, a woman every bit his equal, and the relationship that inspires some of his best work, but if you think you know this tale already, The Tutor will prove you wrong in wonderful ways. . . . [Chapin] writes Shakespeare not like a god among men, but like a human. He feels real in ways other fictional depictions of him never have. . . . The Tutor is a rich, beautifully constructed debut novel that will captivate readers of historical fiction and romance alike, and even the most devoted of Shakespeare fans will be thrilled by this new look at The Bard."—Bookpage

"Author Andrea Chapin does such a good job of effortlessly blending elements from Elizabethan society, culture, and politics with her characters’ development that you forget you’re living in the 21st century. Her sound knowledge of the English Renaissance certainly resounded with this reader."—The Star (UK)

"An elegant entertainment and an impressive debut."—Kirkus

“History springs to vivid life in this beautifully written novel about a young William Shakespeare and the passionate, intelligent woman who changed the course of his life—not to mention literature—forever.”—Christina Baker Kline, New York Times–bestselling author of The Orphan Train

“The Tutor plunges fearlessly into the uncharted years of history’s greatest bard to give us a sumptuous, page-turning account of 1590’s England in the brutal throes of the Tudor dynasty. Katharine De L’Isle, the book’s riveting heroine, isn’t just young Will Shakespeare’s muse, but his teacher in every sense, challenging and elevating his verse even as she unwisely loses her head and heart to him. I was completely captivated. Andrea Chapin is a writer to watch.” —Paula McLain, New York Times–bestselling author of The Paris Wife

“Sexy and cerebral, Andrea Chapin’s romp through one of Shakespeare’s lost years will beguile lovers of poetry and romance alike. A literary delight.”—Elizabeth Gaffney, author of When the World Was Young and Metropolis

"In Andrea's Chapin's absorbing first novel The Tutor, we have a woman to thank for the shape of western literature. Imagine being Shakespeare's muse, the lively smart beautiful being who has the good fortune not only to capture the attention of the young Bard, but to critique his poetry almost as he writes it. A delightful literary debut."—Martha McPhee, author of Bright Angel Time and Dear Money