The Barbarian Nurseries: A Novel (Paperback) 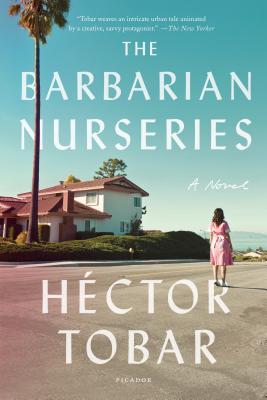 “Tobar has written an incredibly timely novel about a Southern California family and their live-in maid in the throes of an economic downturn and a troubled marriage. Araceli is the last of the hired help in the Torres-Thompson house, who is now charged with all of the housework as well as minding the children. Following a disturbing chain of events, Araceli is left alone with the two boys, and after unsuccessfully exhausting the emergency contact list, she heads off in search of the boys' grandfather. Their journey and the end result is an incredibly observant and perfectly written story of our country's difficult situation with undocumented workers. Highly recommended!”
— Sherri Gallentine, Vroman's Bookstore, Pasadena, CA

Scott and Maureen Torres-Thompson have always relied on others to run their Orange County home. But when bad investments crater their bank account, it all comes down to Araceli: their somewhat prickly Mexican maid. One night, an argument between the couple turns physical, and a misunderstanding leaves the children in Araceli's care. Their parents unreachable, she takes them to central Los Angeles in the hopes of finding Scott's estranged Mexican father---an earnest quest that soon becomes a colossal misadventure, with consequences that ripple through every strata of the sprawling city. Héctor Tobar's The Barbarian Nurseries is a masterful tale of contemporary Los Angeles, a novel as alive as the city itself.

Héctor Tobar is a Pulitzer Prize–winning journalist and novelist. He is the author of the critically acclaimed, New York Times bestseller, Deep Down Dark, as well as The Barbarian Nurseries, Translation Nation, and The Tattooed Soldier. Héctor is also a contributing writer for the New York Times opinion pages and an associate professor at the University of California, Irvine. He's written for The New Yorker, The Los Angeles Times and other publications. His short fiction has appeared in Best American Short Stories, L.A. Noir, Zyzzyva, and Slate. The son of Guatemalan immigrants, he is a native of Los Angeles, where he lives with his family.

“Tobar exhibits a seismographic sensitivity to the tensions along the fault lines of his cultural terrain....His illuminations become our recognitions.” —The New York Times Book Review

“Each moment surprises....Darkly hilarious and moving.” —The Washington Post

“That Tobar is so evenhanded, so compassionate, so downright smart, should place The Barbarian Nurseries on everyone's must-read list.” —The Seattle Times