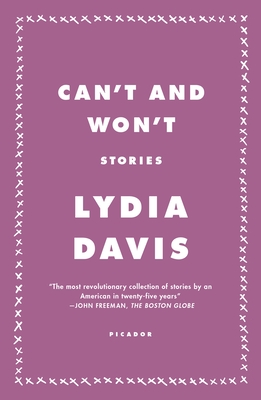 Her stories may be literal one-liners: the entirety of "Bloomington" reads, "Now that I have been here for a little while, I can say with confidence that I have never been here before." Or they may be lengthier investigations of the havoc wreaked by the most mundane disruptions to routine: in "A Small Story About a Small Box of Chocolates," a professor receives a gift of thirty-two small chocolates and is paralyzed by the multitude of options she imagines for their consumption. The stories may appear in the form of letters of complaint; they may be extracted from Flaubert's correspondence; or they may be inspired by the author's own dreams, or the dreams of friends.

What does not vary throughout Can't and Won't, Lydia Davis's fifth collection of stories, is the power of her finely honed prose. Davis is sharply observant; she is wry or witty or poignant. Above all, she is refreshing. Davis writes with bracing candor and sly humor about the quotidian, revealing the mysterious, the foreign, the alienating, and the pleasurable within the predictable patterns of daily life.

Lydia Davis is the author of Essays One, a collection of essays on writing, reading, art, memory, and the Bible. She is also the author of The End of the Story: A Novel and many story collections, including Varieties of Disturbance, a finalist for the 2007 National Book Award for Fiction; Can’t and Won’t (2014); and The Collected Stories of Lydia Davis, described by James Wood in The New Yorker as “a grand cumulative achievement.” Davis is also the acclaimed translator of Swann’s Way and Madame Bovary, both awarded the French-American Foundation Translation Prize, and of many other works of literature. She has been named both a Chevalier and an Officier of the Order of Arts and Letters by the French government, and in 2020 she received the PEN/Malamud Award for Excellence in the Short Story.

“Widely considered one of the most original minds in American fiction today.”—Dana Goodyear, The New Yorker

“This is what the best and most original literature can do: make us more acutely aware of life on and off the page.”—Peter Orner, The New York Times Book Review

“[Can't and Won't] is evidence of a writer who is in total control of her own peculiar original voice; its pleasures are unexpected and manifold.”—Kate Christensen, Elle

“The most revolutionary collection of stories by an American in twenty-five years.”—John Freeman, The Boston Globe

“Drop everything and pick up Lydia Davis's fifth collection of short stories...Observation, drama, and (yes) compression—it's all there, giving the most minor moments a kind of epic weight.”—David L. Ulin, Los Angeles Times

“Davis dances right up to and around that final mystery that can't, won't, and must be borne, that most inexplicable magic trick, life's vanishing act.”—Parul Sehgal, NPR