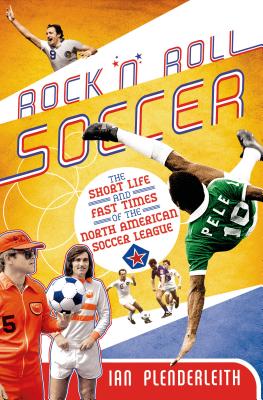 By Ian Plenderleith, Rodney Marsh (Foreword by)
$27.99
Email or call for price

The North American Soccer League - at its peak in the late 1970s - presented soccer as performance, played by men with a bent for flair, hair and glamour. More than just Pelé and the New York Cosmos, it lured the biggest names of the world game like Johan Cruyff, Franz Beckenbauer, Eusebio, Gerd Müller and George Best to play the sport as it was meant to be played-without inhibition, to please the fans.

The first complete look at the ambitious, star-studded NASL, Rock 'n' Roll Soccer reveals how this precursor to modern soccer laid the foundations for the sport's tremendous popularity in America today. Bringing to life the color and chaos of an unfairly maligned league, soccer journalist Ian Plenderleith draws from research and interviews with the men who were there to reveal the madness of its marketing, the wild expectations of businessmen and corporations hoping to make a killing out of the next big thing, and the insanity of franchises in scorching cities like Las Vegas and Hawaii. That's not to mention the league's on-running fight with FIFA as the trailblazing North American continent battled to innovate, surprise, and sell soccer to a whole new world.

As entertaining and raucous as the league itself, Rock 'n' Roll Soccer recounts the hype and chaos surrounding the rapid rise and cataclysmic fall of the NASL, an enterprising and groundbreaking league that did too much right to ignore.

IAN PLENDERLEITH is a British soccer writer and journalist who has lived in the United States for the past 15 years. Author of the critically acclaimed short story collection For Whom The Ball Rolls, he has been writing about soccer in the UK, Germany and the US for the past twenty years for publications such as The Guardian, The Wall Street Journal, Soccer America, Prospect and When Saturday Comes.

“Scrupulously researched and sourced, with first-person accounts knitted together in an enthusiastic, irreverent narrative, this is a gift to fans of America's richer-than-expected soccer history.” —Booklist

“An important contribution to the understanding of the NASL, American soccer, and worldwide football as a whole. Soccer fans will gain a better appreciation of the much derided league. Recommended for those interested in the game or in the intersection of sports and business.” —Library Journal, starred review

“An entertaining but level-headed look back at a league that broke a lot of rules and a lot of barriers.” —Sports Myriad

“[This] is the definitive history on the original NASL. Nothing out there rivals the detail and variety provided by this book. It is easily one of the best soccer titles of 2015, if not the best.” —International Soccer Network