Burning Boy: The Life and Work of Stephen Crane (Hardcover) 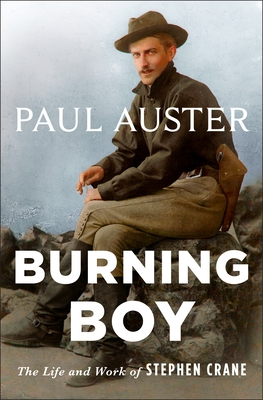 With Burning Boy, celebrated novelist Paul Auster tells the extraordinary story of Stephen Crane, best known as the author of The Red Badge of Courage, who transformed American literature through an avalanche of original short stories, novellas, poems, journalism, and war reportage before his life was cut short by tuberculosis at age twenty-eight.

Auster’s probing account of this singular life tracks Crane as he rebounds from one perilous situation to the next: A controversial article written at twenty disrupts the course of the 1892 presidential campaign, a public battle with the New York police department over the false arrest of a prostitute effectively exiles him from the city, a star-crossed love affair with an unhappily married uptown girl tortures him, a common-law marriage to the proprietress of Jacksonville’s most elegant bawdyhouse endures, a shipwreck results in his near drowning, he withstands enemy fire to send dispatches from the Spanish-American War, and then he relocates to England, where Joseph Conrad becomes his closest friend and Henry James weeps over his tragic, early death.

In Burning Boy, Auster not only puts forth an immersive read about an unforgettable life but also, casting a dazzled eye on Crane’s astonishing originality and productivity, provides uniquely knowing insight into Crane’s creative processes to produce the rarest of reading experiences—the dramatic biography of a brilliant writer as only another literary master could tell it.

Paul Auster is the bestselling author of 4 3 2 1, Sunset Park, Invisible, The Book of Illusions, and The New York Trilogy, among many other works. In 2006 he was awarded the Prince of Asturias Prize for Literature. Among his other honors are the Prix Médicis Étranger for Leviathan, the Independent Spirit Award for the screenplay of Smoke, and the Premio Napoli for Sunset Park. In 2012, he was the first recipient of the NYC Literary Honors in the category of fiction. He has also been a finalist for the International IMPAC Dublin Literary Award (The Book of Illusions), the PEN/Faulkner Award (The Music of Chance), the Edgar Award (City of Glass), and the Man Booker Prize (4 3 2 1). He is a member of the American Academy of Arts and Letters and a Commandeur de l’Ordre des Arts et des Lettres. His work has been translated into more than forty languages. He lives in Brooklyn, New York.

"A labor of love of a rare kind in contemporary letters. . . . Auster is often sharp-eyed and revealing about the details of Crane's writing."
—The New Yorker

“Incandescent. . . Auster writes with such enrapturing vibrancy, expertise, and empathy that his biography serves as an intensive course in attentive, inquisitive reading as well as a thrillingly insightful and resonant portrait of a young artist.”
—Booklist (starred review)

"Beguiling. . . . Auster's sprawling narrative combines punchy writing and shrewd analysis with an exuberant passion for his subject. The result is a definitive biography of a great writer."
—Publishers Weekly (starred review)

"Auster's in-depth exploration of major works like Red Badge is engrossing, as are most of his renderings of Crane's life experiences. . . . Essential."
—Kirkus Reviews

"Paul Auster calls Stephen Crane 'The Burning Boy,' and Crane’s passions burn incandescently in this exceptional biography of a prodigy whose life was cut tragically short. It represents a rare literary match—a visceral affinity—between a biographer and a subject, both masters of modern fiction. And one reads it in the same white heat.”
—Judith Thurman, National Book Award–winning author of Isak Dinesen and Secrets of the Flesh

"Paul Auster’s all-in obsessive engagement with the 19th century Bad Boy of American literature, Stephen Crane, is brilliant and beautiful. Auster's mastery of the historical context, his writerly, troubled, imaginative insights into Crane’s character and the analysis of the works, all superb. And the prose is beautiful — lucid and clear, and yet lyrical and personal. I was deeply moved by his portrayal of Crane's relationships with Conrad and James and other writers of the time and Crane's common law wife, Cora, and his judgmental, bourgeois older brother William. And his delicacy regarding Crane’s other relations with women. All of it. What a story! This is more than a novel, more than a biography, more than a book of critical analysis. This is a significant work of literature. And the most profound homage of one writer to another that I’ve ever read.”
—Russell Banks, author of Cloudsplitter and The Sweet Hereafter

“One of those books that one reads from beginning to end. It answers a thousand outstanding riddles about Crane, and a memorial that should once and for all place him—a modernist before there was such a thing—among the very greatest American writers.”
—Luc Sante, author of Lowlife and The Factory of Facts

“It’s hard to imagine a more perfect team than Stephen Crane and the author of The Music of Chance. The music here is often terrifying, discordant, a music of sorrow and despair, but it’s still fabulous music. Paul Auster treats biography as an art form, and Crane’s works as old friends, always worth a visit, or a new, alert redescription. The result is incomparable—who else would catch premonitions of Harold Pinter’s plays in Crane’s dialogue—and reminds us eloquently that Crane belongs very much to our own time, more so, perhaps, than to his own.”
—Michael Wood, author of Alfred Hitchcock and The Habits of Distraction

“Burning Boy is an authoritative study of Stephen Crane, whose innovative narrative and poetic techniques foreshadow modern American literature. Paul Auster, one of our preeminent novelists, explores Crane’s psyche with unerring insight and freshly interprets Crane’s genius. This book will revitalize interest in the most important American author of his generation.”
—Paul Sorrentino, author of Stephen Crane: A Life of Fire and editor of Stephen Crane Remembered