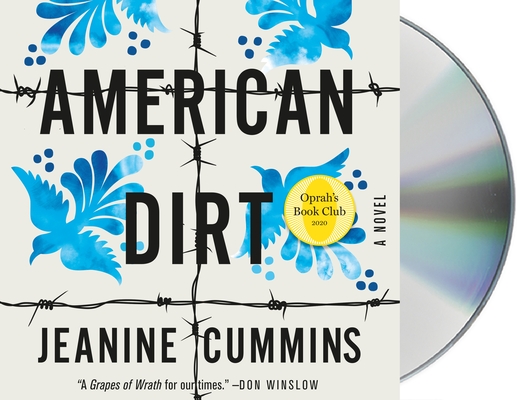 “American Dirt is a beautiful, heartbreaking odyssey, a vivid world filled with angels and demons, one I only wanted to leave so I could get my heart out of my throat. Cartel violence sends a mother and her son careening north from Acapulco toward the relative safety of the United States, and every moment of their journey is rendered in frantic, sublime detail. Danger lurks around the corner of every paragraph, but so does humanity, empathy, and stunning acts of human kindness. You will feel the toll of every mile, the cost of every bullet, and the power of every page. A wonder.”
— Thatcher Svekis, DIESEL, A Bookstore, Santa Monica, CA

“This book is not simply the great American novel; it’s the great novel of las Americas. It’s the great world novel! This is the international story of our times. Masterful.”—Sandra Cisneros

También de este lado hay sueños. On this side too, there are dreams.

Lydia Quixano Pérez lives in the Mexican city of Acapulco. She runs a bookstore. She has a son, Luca, the love of her life, and a wonderful husband who is a journalist. And while there are cracks beginning to show in Acapulco because of the drug cartels, her life is, by and large, fairly comfortable.

Even though she knows they’ll never sell, Lydia stocks some of her all-time favorite books in her store. And then one day a man enters the shop to browse and comes up to the register with a few books he would like to buy—two of them her favorites. Javier is erudite. He is charming. And, unbeknownst to Lydia, he is the jefe of the newest drug cartel that has gruesomely taken over the city. When Lydia’s husband’s tell-all profile of Javier is published, none of their lives will ever be the same.

Forced to flee, Lydia and eight-year-old Luca soon find themselves miles and worlds away from their comfortable middle-class existence. Instantly transformed into migrants, Lydia and Luca ride la bestia—trains that make their way north toward the United States, which is the only place Javier’s reach doesn’t extend. As they join the countless people trying to reach el norte, Lydia soon sees that everyone is running from something. But what exactly are they running to?

American Dirt will leave listeners utterly changed. It is a literary achievement filled with poignancy, drama, and humanity. It is one of the most important books for our times.

Already being hailed as "a Grapes of Wrath for our times" and "a new American classic," Jeanine Cummins's American Dirt is a rare exploration into the inner hearts of people willing to sacrifice everything for a glimmer of hope.

"Narrator Yareli Arizmendi illuminates the humanity and individuality of Latin American migrants as they flee toward refuge in the North..The account of Lydia and Luca's travails, including terrifying rides atop Mexico's freight trains, is utterly compelling. But it is Arizmendi's voicing of Lydia, so full of fierce tenderness, that will stay with listeners after the story's close."—AudioFile Magazine

Jeanine Cummins is the author of the bestselling novel American Dirt, as well as The Outside Boy and The Crooked Branch, and the bestselling true crime memoir A Rip in Heaven. She lives in New York with her husband and two children.

Jeanine Cummins is the author of the bestselling novel American Dirt, as well as The Outside Boy and The Crooked Branch, and the bestselling true crime memoir A Rip in Heaven. She lives in New York with her husband and two children.

“American Dirt just gutted me, and I didn’t just read this book—I inhabited it….Everything about this book was so extraordinary. It’s suspenseful, the language is beautiful, and the story really opened my heart. I highly recommend it, and you will not want to put it down. It is just a magnificent novel.”—Oprah

“American Dirt is a literary novel with nuanced character development and arresting language; yet, its narrative hurtles forward with the intensity of a suspense tale. Its most profound achievement, though, is something I never could’ve been told…American Dirt is the novel that, for me, nails what it’s like to live in this age of anxiety, where it feels like anything can happen, at any moment.”
—Maureen Corrigan, NPR’s Fresh Air

“This tense, illuminating novel takes off like a rocket…”
—People (Book of the Week)

“This novel is a heart-stopping story of survival, danger, and love…”
—The New York Times

“I devoured the novel in a dry-eyed adrenaline rush….A profoundly moving reading experience.”
—The Washington Post

“The story is masterfully composed of timeless elements: the nightmare logic of grief, the value of human kindness, the power of love to drive us to do the unimaginable…Cummins proves that fiction can be a vehicle for expanding our empathy.”
—Time

“Destined to be a classic.”
—Woman’s Day

“Heartfelt and hopeful, American Dirt is a novel for our times. Thrilling, epic, and unforgettable….”
—Esquire

“Stunning…remarkable….A novel as of the zeitgeist as any, American Dirt is also an account of love on the run that will never lose steam.”
—Vogue

“This one will tug at your heartstrings.”
—Marie Claire

“As literature, American Dirt is modern realism at its finest: a tale of moral challenge in the spirit of Theodore Dreiser wrapped inside a big-hearted social epic like The Grapes of Wrath. American Dirt is going to be the defining book of 2020.”
—New York Journal of Books

“I strive to write page-turners because I love to read them, and it’s been a long time since I turned pages as fast as I did with American Dirt. Its plot is tight, smart, and unpredictable. Its message is important and timely, but not political. Its characters are violent, compassionate, sadistic, fragile, and heroic. It is rich in authenticity. Its journey is a testament to the power of fear and hope and belief that there are more good people than bad.”
—John Grisham

“American Dirt is both a moral compass and a riveting read. I couldn’t put it down. I’ll never stop thinking about it.”
—Ann Patchett, #1 New York Times bestselling author of The Dutch House and Commonwealth

“Why do we read fiction? By immersing ourselves in the lives of fictional characters we gain emotional depth, breadth, and empathy. We become more human. I have never felt more changed—or challenged—by a book than I have by American Dirt. It’s truly a revelation.”
—Elin Hilderbrand, #1 New York Times bestselling author of Summer of ’69

“Relevant, powerful, extraordinary. It is a remarkable combination of joy and terror, infused always with the restorative power of a mother's love and the endless human capacity for hope. I hope everyone reads it and is as moved by it as I was.”
—Kristin Hannah, #1 New York Times bestselling author of The Nightingale and The Great Alone

“Riveting, timely, a dazzling accomplishment. Jeanine Cummins makes us all LIVE and BREATHE the refugee story.”
—Julia Alvarez, author of In the Time of the Butterflies

“American Dirt is an extraordinary piece of work, a perfect balancing act with terror on one side and love on the other. I defy anyone to read the first seven pages of this book and not finish it. The prose is immaculate, and the story never lets up. This book will be an important voice in the discussion about immigration and los migrantes; it certainly puts the lie to the idea that we are being besieged by ‘bad hombres.’ On a micro scale—the story scale, where I like to live—it’s one hell of a novel about a good woman on the run with her beautiful boy. It’s marvelous.”
—Stephen King

“From its heart-stopping first sentence to its heart-shattering last, Cummins’s story of immigrants is just what we need now. Gritty yet sensitive, realistic yet hopeful, grand and granular, American Dirt by Jeanine Cummins is a Grapes of Wrathfor our times.”
—Don Winslow, author of the New York Times bestseller The Border

“The most gripping thriller you’ll read this side of Marathon Man. This thing goes harder than a Lee Child novel and the writing sings. Deserves to be a Gone Girl-level hit.”
—Joe Hill, #1 New York Times bestselling author of The Fireman and Heart-Shaped Box

“Jeanine Cummins writes with such grace, compassion, and precision that I could not stop reading.”
—Erika Sánchez, author of I Am Not Your Perfect Mexican Daughter

“This is a book that’s both hard to read and hard to put down and will no doubt spark a lot of conversation.”
—Real Simple

“This book is not simply the great American novel; it’s the great novel of las Americas. It’s the great world novel! This is the international story of our times. Masterful.”
—Sandra Cisneros, author of The House on Mango Street

“American Dirt is an urgent, blistering, unforgettable book. In her portrayal of Lydia and Luca, a mother and son forced to leave their Mexican home, Jeanine Cummins has given face to migrants everywhere who flee violence and near-certain death in search of only one thing: a chance at life. Beautifully written, thrilling in its propulsive force, American Dirt is a new American classic.”
—Tara Conklin, author of the New York Times bestseller The Last Romantics

“The story of the migrant is the story of our times, and Jeanine Cummins is a worthy chronicler. At once intimate and epic, American Dirt is an exhilarating and beautiful book about parental love and human hope.”
—Rumaan Alam, author of That Kind of Mother and Rich and Pretty

“Urgent and unforgettable, American Dirt leaps the borders of the page and demands attention, especially now.”
—Sarah Blake, author of the New York Times bestsellers The Postmistress and The Guest Book

“A powerful, moving, and unforgettable read.”
—Reyna Grande, author of The Distance Between Us

“This tough, powerful novel is an eye opener. It made me understand better why someone would give up the home they know and love to survive, and the grit required to cross that border. It is essential reading for our time.”
—Tracy Chevalier, bestselling author of Girl With a Pearl Earring

“This extraordinary novel about unbreakable determination will move the reader to the core.”
—Publishers Weekly (starred review)

“Lydia and Luca are utterly believable characters, and their breathtaking journey moves with the velocity and power of one of those freight trains. Intensely suspenseful and deeply humane, this novel makes migrants seeking to cross the southern U.S. border indelibly individual.”
—Kirkus Reviews (starred review)

“American Dirt may be the don’t-miss book of 2020.”
—Booklist (starred review)

“Cummins is a skilled and empathetic chronicler of trauma and its aftermath…American Dirt is an immersive story, fueled by the elemental love of a mother for her son.”
—Minnesota Star Tribune

“This gripping story of a mother and son on Mexico’s migrant trail combines humane intentions with propulsive, action-movie execution.”
—The Guardian

“This is a book everyone should read.”
—Woman & Home