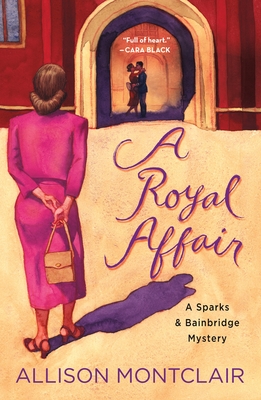 This is book number 2 in the Sparks & Bainbridge Mystery series.

More goes wrong than could be imagined when Iris Sparks and Gwendolyn Bainbridge of The Right Sort Marriage Bureau are unexpectedly engaged to dig into the past of a suitor of a royal princess in Allison Montclair’s delightful second novel, A Royal Affair.

In London 1946, The Right Sort Marriage Bureau is just beginning to take off and the proprietors, Miss Iris Sparks and Mrs. Gwendolyn Bainbridge, are in need of a bigger office and a secretary to handle the growing demand. Unfortunately, they don't yet have the necessary means. So when a woman arrives—a cousin of Gwen's—with an interesting and quite remunerative proposition, they two of them are all ears.

The cousin, one Lady Matheson, works for the Queen in "some capacity" and is in need of some discreet investigation. It seems that the Princess Elizabeth has developed feelings for a dashing Greek prince and a blackmail note has arrived, alluding to some potentially damaging information about said prince. Wanting to keep this out of the palace gossip circles, but also needing to find out what skeletons might lurk in the prince's closet, the palace has quietly turned to Gwen and Iris. Without causing a stir, the two of them must now find out what secrets lurk in the prince's past, before his engagement to the future Queen of England is announced. And there's more at stake than the future of the Empire —there is their potential new office that lies in the balance.

ALLISON MONTCLAIR grew up devouring hand-me-down Agatha Christie paperbacks and James Bond movies. As a result of this deplorable upbringing, Montclair became addicted to tales of crime, intrigue, and espionage. She now spends her spare time poking through the corners, nooks, and crannies of history, searching for the odd mysterious bits and transforming them into novels of her own. She is the author of the Sparks & Bainbridge historical mystery series, which begins with The Right Sort of Man.