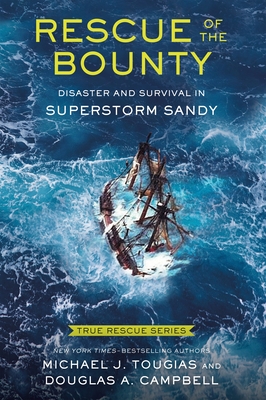 Book six in the True Rescue series for young readers, this pulse-pounding account of disaster and survival at sea follows the HMS Bounty whose fateful course through Superstorm Sandy would lead to one of the most heroic Coast Guard rescue missions ever...

On October 23, 2012, with Superstorm Sandy fast approaching, Captain Robin Walbridge made the fateful decision to sail the HMS Bounty from New London, Connecticut to St. Petersburg, Florida, believing the wooden ship, a replica of the original, famous Bounty, would fare better at sea than at port. He told the crew that anyone who did not want to come on the voyage could leave the ship and there would be no hard feelings. No one took the captain up on his offer, and this decision would have fatal consequences.

Four days into the voyage, Superstorm Sandy made an almost direct hit on the Bounty—sending the crew tumbling into the ocean filled with crashing thirty-foot waves. Some were swept far from the ship, others found themselves tangled in the rigging, while others were trapped below the surface by the masts and spreaders. What ensued was one of the most complex, dangerous, and massive Coast Guard rescue missions in history. Rescue of the Bounty from authors Michael J. Tougias and Douglas Campbell is a gripping, inspiring, and unforgettable account—the perfect choice for young adventure-seekers, as well as fans of I Survived, Torpedoed, and Grenade.

Michael J. Tougias is the author of many award-winning true rescue stories, including the New York Times-bestseller The Finest Hours, A Storm Too Soon, Into the Blizzard, and Attacked at Sea. He also published a memoir, The Waters Between Us: A Boy, A Father, Outdoor Misadventures and the Healing Power of Nature. A frequent lecturer on his work, Tougias splits his time between Massachusetts and Florida.

Douglas Campbell is the author of non-fiction books for adults, including The Sea’s Bitter Harvest and Eight Survived. He has spent his career in journalism. For 25 years, he was a staff writer at the Philadelphia Inquirer, where two of his stories were nominated for the Pulitzer Prize. Later he won numerous awards as a Senior Writer at Soundings Magazine, covering all aspects of recreational boating. Doug began sailing on the Delaware River in 1979 and still keeps a small boat moored there. He and his wife Monica also sail a 32-foot blue water boat, Robin, with which they’ve competed in the bi-annual Bermuda 1-2 Race. Doug has placed third out of 39 boats on corrected time sailing the singlehanded leg of the race from Newport, Rhode Island, to Bermuda.