The Flamethrowers: A Novel (Hardcover) 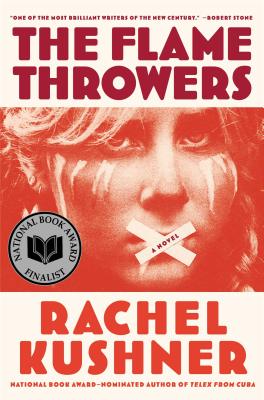 By Rachel Kushner
$26.99
Email or call for price

It's the 1970s and a young woman throws herself into radical art and
politics, carried heedlessly toward New York and Rome astride a
motorcycle. More than a Kerouackian thrill ride, The Flamethrowers
is, in the words of novelist Lauren Groff, "a beautiful book . . . a
book full of truth . . . about innocence and speed and stepping up to a
dangerous brink." Highly endorsed.

Rachel Kushner’s The Flamethrowers, a finalist for the National Book Award, was just named a Top Ten Book of 2013 by the New York Times Book Review and one of Time magazine’s top ten fiction books. Kushner’s first novel, Telex from Cuba, was also a finalist for a National Book Award and was reviewed on the cover of The New York Times Book Review. The Flamethrowers, even more ambitious and brilliant, is the riveting story of a young artist and the worlds she encounters in New York and Rome in the mid-1970s—by turns underground, elite, and dangerous.

The year is 1975 and Reno—so-called because of the place of her birth—has come to New York intent on turning her fascination with motorcycles and speed into art. Her arrival coincides with an explosion of activity in the art world—artists have colonized a deserted and industrial SoHo, are staging actions in the East Village, and are blurring the line between life and art. Reno meets a group of dreamers and raconteurs who submit her to a sentimental education of sorts. Ardent, vulnerable, and bold, she begins an affair with an artist named Sandro Valera, the semi-estranged scion of an Italian tire and motorcycle empire. When they visit Sandro’s family home in Italy, Reno falls in with members of the radical movement that overtook Italy in the seventies. Betrayal sends her reeling into a clandestine undertow.

The Flamethrowers is an intensely engaging exploration of the mystique of the feminine, the fake, the terrorist. At its center is Kushner’s brilliantly realized protagonist, a young woman on the verge. Thrilling and fearless, this is a major American novel from a writer of spectacular talent and imagination.

Rachel Kushner is the author of internationally acclaimed novels The Mars Room, The Flamethrowers, and Telex from Cuba, as well as a book of short stories, The Strange Case of Rachel K. She has won the Prix Médicis and been a finalist for the Booker Prize, the National Book Critics Circle Award, and was twice a finalist for the National Book Award in Fiction. She is a Guggenheim Foundation Fellow and the recipient of the Harold D. Vursell Memorial Award from the American Academy of Arts and Letters. Her books have been translated into twenty-six languages.

“Rachel Kushner’s second novel, The Flamethrowers, is scintillatingly alive, and also alive to artifice. It ripples with stories, anecdotes, set-piece monologues, crafty egotistical tall tales, and hapless adventures: Kushner is never not telling a story… it manifests itself as a pure explosion of now: it catches us in its mobile, flashing present, which is the living reality it conjures on the page at the moment we are reading… Kushner employs a[n]…eerie confidence throughout her novel, which constantly entwines the invented with the real, and she often uses the power of invention to give her fiction the authenticity of the reportorial, the solidity of the historical…Kushner watches the New York art world of the late seventies with sardonic precision and lancing humor, using Reno’s reportorial hospitality to fill her pages with lively portraits and outrageous cameos…[Kushner’s] novel is an achievement precisely because it resists either paranoid connectedness or knowing universalism. On the contrary, it succeeds because it is so full of vibrantly different stories and histories, all of them particular, all of them brilliantly alive.”
— James Wood

“The Flamethrowers unfolds on a bigger, brighter screen than nearly any recent American novel I can remember. It plays out as if on Imax, or simply higher-grade film stock…Ms. Kushner can really write. Her prose has a poise and wariness and moral graininess that puts you in mind of ….Robert Stone and Joan Didion…[Kushner has] a sensibility that’s on constant alert for crazy, sensual, often ravaged beauty…persuasive and moving…provocative.”
— Dwight Garner

“Life, gazed at with exemplary intensity over hundreds of pages and thousands of sentences precision-etched with detail—that’s what The Flamethrowers feels like. That’s what it is. And it could scarcely be better. The Flamethrowers is a political novel, a feminist novel, a sexy novel, and a kind of thriller…Virtually every page contains a paragraph that merits—and rewards—rereading."
— Tom Bissell

“Rachel Kushner’s new novel, The Flamethrowers, is a high-wire performance worthy of Philippe Petit. On lines stretched tight between satire and eulogy, she strolls above the self-absorbed terrain of the New York art scene in the 1970s, providing a vision alternately intimate and elevated…[Kushner is] a superb recent-historical novelist…20 brilliant pages [of The Flamethrowers] could make any writer’s career: a set piece of New York night life that’s a daze of comedy, poignancy and violence…What really dazzles…is her ability to steer this zigzag plot so expertly that she can let it spin out of control now and then…The Flamethrowers concludes with two astonishing scenes: one all black, one all white, as striking as any of the desert photographs Reno aspires to shoot, but infinitely richer and more evocative. Hang on: This is a trip you don’t want to miss.”
— Ron Charles

“[A] big, rich wonder of a novel… [Kushner’s] polychrome sentences…are shot through with all the longing and regret you find in those of Thomas Pynchon, whose influence is all over this novel… a glittering, grave, brutally unsentimental book that’s spectacularly written enough to touch greatness.”
— Craig Seligman

“Exhilarating…it’s impossible not to be pulled in by the author’s sense of the period’s vitality…the novel’s brilliance is in its understanding of art’s relationship to risk, and in its portrait of Reno’s—and New York’s—age of innocence.”
— Megan O’Grady

“[A] brilliant lightning bolt of a novel…The Flamethrowers is an entire world, intimately and convincingly observed, filled with characters whose desires feel true. It is also an uncannily perceptive portrait of our culture—psychologically and philosophically astute, candid about class, art, sex and the position of women—with a deadly accuracy that recalls the young Joan Didion, and that, despite the precisely rendered historical backdrop, gives the story a timeless urgency.”
— Maud Newton

“Brilliant and exhilarating…Kushner fearlessly tackles art, death, and social unrest. In so doing, she has written the sort of relentless and immersive novel that forces the reader to look up and make sure the room hasn’t disappeared around her.”
— Eugenia Williamson

“Exhilarating, psychologically complex, and perfectly intense, this is a thrilling contemporary novel likely to become a cultural touchstone.”
— Emily Temple

“Rachel Kushner so deftly interweaves the story of an Italian industrialist with that of a young woman insinuating herself into the 1970s New York art scene that The Flamethrowers slowly and seductively becomes a novel you just can’t quit.”
— Sherryl Connelly

“The Flamethrowers not only harnesses the energies of violent Italian politics; it also converts the intensity of radical New York visual art into shining, whirling prose.”
— Jimmy So

“In her smash-hit debut, Telex from Cuba (2008), Kushner took on corporate imperialism and revolution, themes that also stoke this knowing and imaginative saga of a gutsy yet naïve artist from Nevada… Kushner, with searing insights, contrasts the obliteration of the line between life and art in hothouse New York with life-or-death street battles in Rome. Adroitly balancing astringent social critique with deep soundings of the complex psyches of her intriguing characters, Kushner has forged an incandescently detailed, cosmopolitan, and propulsively dramatic tale of creativity and destruction.”
— Booklist, STARRED review

“This rich second novel from Kushner takes place in late-‘70s New York City and Italy…Kushner’s psychological explorations of her characters are incisive, the novel is peppered with subtle ‘70s details, and it bursts with you-are-there depictions of its time and places.”
— Publishers Weekly, STARRED review

“A novel of art and politics but also of bikes and speed…exhilarating.”
— Kirkus Reviews, STARRED review

“The Flamethrowers is an ambitious and serious American novel. The sentences are sharp and gorgeously made. The scope is wide. The political and the personal are locked in a deep and fascinating embrace. Kushner writes about excitement and tension with gusto and grace; she describes Italy and New York with a dark and savvy irony.”
— Colm Tóibín, author of Brooklyn and The Testament of Mary

“I didn't know what it could possibly look like for something to be a super smart sexy novel; now I know. The Flamethrowers is its own category of Wow, and Kushner is the champion of something strange, wonderful and real.”
— Rivka Galchen, author of Atmospheric Disturbances

“Kushner is rapidly emerging as a thrilling and prodigious novelist.”
— Jonathan Franzen, author of Freedom

“Oscillating between the hedonistic New York artworld and Italy in the midst of the Years of Lead, The Flamethrowers is that rare thing, a novel that uses recent history not as a picturesque backdrop, but as a way of interrogating the present. Kushner’s urgent prose and psychological acuity make this one of the most compelling and enjoyable novels I’ve read this year.”
— Hari Kunzru, author of Gods Without Men

“The controlled intensity and perception in Rachel Kushner's novels mark her as one of the most brilliant writers of the oncoming century. She's going to be one we turn to for our serious pleasures and for the insight and wisdom we'll be needing in hard times to come. Rachel Kushner is a novelist of the very first order. The Flamethrowers follows Telex from Cuba as a masterful work.”
— Robert Stone

“The Flamethrowers lives up to its incendiary title—it is a brilliant, startling truly revolutionary book about the New York art world of the seventies, Italian class warfare, and youth's blind acceleration into the unknown. Kushner is a genius prose stylist, and her Reno is one of the most fully realized protagonists I've ever encountered, moving fluidly from the fringe of the fringe movement to the center of the action. I want to recommend this stunning book to everyone I know.”
— Karen Russell, author of Swamplandia!

"Rachel Kushner writes dazzling, sexy, glorious prose. She is as brilliant on men and motorcycles as she is on art and film. The Flamethrowers is an ambitious and powerful novel."
— Dana Spiotta, author of Eat the Document and Stone Arabia

“In this extremely bold, swashbuckling novel, romantic and disillusioned at once, intellectually daring and even subversive, Rachel Kushner has created the most beguiling American ingénue abroad, well, maybe ever: Daisy Miller as a sharply observant yet vulnerable Reno-raised motorcycle racer and aspiring artist, set loose in gritty 70s New York and the Italy of the Red Brigades.”
— Francisco Goldman, author of Say Her Name

“The Flamethrowers is about machines (motorcycles and guns, but also cameras) and the way they revolutionized the last century (its politics and violence, but also its art)…[Kushner’s] style is a rare blend of romanticism and historicism—with a sense of precision.”
— Christian Lorentzen