Growing Up Human: The Evolution of Childhood (Hardcover) 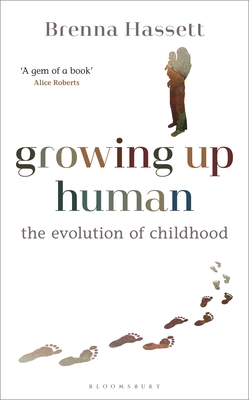 In Growing Up Human, Brenna Hassett explores how our evolutionary history has shaped a phenomenon every reader will have experienced – childhood.

Tracking deep into our evolutionary history, anthropological science has begun to unravel one particular feature that sets us apart from the many, many animals that came before us – our uniquely long childhoods. Growing Up Human looks at how we have diverged from our ancestral roots to stay 'forever young' – or at least what seems like forever – and how the evolution of childhood is a critical part of the human story.

Beginning with a look at the ways animals invest in their offspring, the book moves through the many steps of making a baby, from pair-bonding to hidden ovulation, points where our species has repeatedly stepped off the standard primate path. From the mystery of monogamy to the minefield of modern parenting advice, biological anthropologist Brenna Hassett reveals how differences between humans and our closest cousins lead to our messy mating systems, dangerous pregnancies, and difficult births, and what these tell us about the kind of babies we are trying to build.

Using observations of our closest primate relatives, the tiny relics of childhood that come to us from the archaeological record, and the bones and teeth of our ancestors, science has started to unravel the evolution of our childhood right down the fossil record. In our species investment doesn't stop at birth, and as Growing Up Human reveals, we can compare every aspect of our care and feeding, from the chemical composition of our milk to our fondness for formal education from ancient times onwards, in order to understand just what we evolved our weird and wonderful childhoods for.

Brenna Hassett is a biological anthropologist whose career has taken her around the globe, researching the past using the clues left behind in human remains. She has a PhD from University College London, where she is currently a researcher, and is also a Scientific Associate at the Natural History Museum, London. Brenna specialises in using clues from the human skeleton to understand how people lived and died in the past. Her research focuses on the evidence of health and growth locked into teeth to investigate how children grew (or didn't) across the world and across time.

Her first book– Built on Bones: 15,000 Years of Urban Life and Death, also published by Bloomsbury – was well received by critics at the LA Times, the Guardian, and The Times, which named it one of the top 10 science books of the year. She followed this up with Growing Up Human: The Evolution of Childhood in 2022.


Brenna is a founding member of the TrowelBlazers Project, dedicated to increasing the visibility of women in the digging sciences.

“Superb … and often hilarious. Growing Up Human is what happens when science meets an unusually entertaining and uninhibited writer … should be appreciated by anyone pregnant, planning to be pregnant, or who has ever had a child or been one.” —Wall Street Journal

“A thought-provoking discussion about why humans experience a long childhood ... Hassett artfully dissects the sometimes problematic dogma surrounding growth and development, such as whether physical size predicts life span; debunks common myths, such as the idea that the reproductive cycles of women who regularly interact with one another will synchronize; and rejects falsehoods, such as the idea that toxins are produced during the menstrual cycle.” —Science

“With characteristic wit, humour and verve, Brenna Hassett delves deep into our evolutionary past and inner nature to explain why humans are 'the ape who never grew up'.” —Alice Roberts

“Bursting with fascinating ideas and surprising facts, Growing Up Human pulls off a masterly trick, with such lucid and entertaining writing that even complex scientific ideas slip down a treat. This is human evolution at its most captivating; clever and charming, just like our amazing babies.” —Rebecca Wragg Sykes, author of Kindred