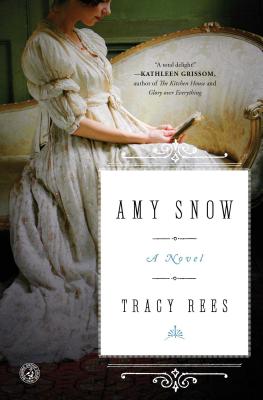 Winner of the UK’s Richard & Judy Search for a Bestseller Competition, this page-turning debut novel follows an orphan whose late, beloved best friend bequeaths her a treasure hunt that leads her all over Victorian England and finally to the one secret her friend never shared.

It is 1831 when eight-year-old Aurelia Vennaway finds a naked baby girl abandoned in the snow on the grounds of her aristocratic family’s magnificent mansion. Her parents are horrified that she has brought a bastard foundling into the house, but Aurelia convinces them to keep the baby, whom she names Amy Snow. Amy is brought up as a second-class citizen, despised by Vennaways, but she and Aurelia are as close as sisters. When Aurelia dies at the age of twenty-three, she leaves Amy ten pounds, and the Vennaways immediately banish Amy from their home.

But Aurelia left her much more. Amy soon receives a packet that contains a rich inheritance and a letter from Aurelia revealing she had kept secrets from Amy, secrets that she wants Amy to know. From the grave she sends Amy on a treasure hunt from one end of England to the other: a treasure hunt that only Amy can follow. Ultimately, a life-changing discovery awaits...if only Amy can unlock the secret. In the end, Amy escapes the Vennaways, finds true love, and learns her dearest friend’s secret, a secret that she will protect for the rest of her life.

An abandoned baby, a treasure hunt, a secret. As Amy sets forth on her quest, readers will be swept away by this engrossing gem of a novel—the wonderful debut by newcomer Tracy Rees.

Tracy Rees is a Cambridge graduate with a degree in Modern and Medieval Languages. After an eight-year career in nonfiction publishing, she worked as a counselor for people with cancer and their families. Amy Snow is her first novel. She lives in Swansea, Wales, and is now writing her second novel.

"A feisty, appealing heroine; a fast-paced, gorgeously descriptive narrative; and a mystery to be uncovered ... What more could a reader wish for?"
— Lucinda Riley, author of Hothouse Flower

"This charming character captured my heart, and her compelling adventure kept me turning the pages. A total delight!"
— Kathleen Grissom, author of The Kitchen House and Glory over Everything

"This is a treasure hunt story of resilience and friendship. Tightly plotted and rich with Victorian detail, we eagerly follow Amy as she unravels the secrets that will lead her to a new life."
— Priya Parmar, author of Vanessa and Her Sister and Exit the Actress

"A hugely appealing tale of the endurance of friendship. With the elements of romance, mystery, drama, and history, there's much here to love."
— Library Journal, starred review