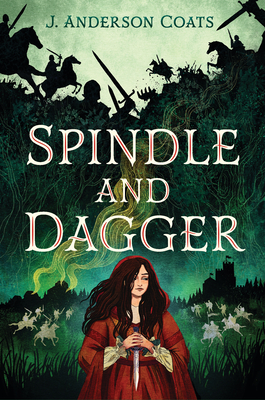 This rich literary novel follows Elen, who must live a precarious lie in order to survive among the medieval Welsh warband that killed her family.

Wales, 1109. Three years ago, a warband raided Elen’s home. Her baby sister could not escape the flames. Her older sister fought back and almost killed the warband’s leader, Owain ap Cadwgan, before being killed herself. Despite Elen’s own sexual assault at the hands of the raiders, she saw a chance to live and took it. She healed Owain’s wound and spun a lie: Owain ap Cadwgan, son of the king of Powys, cannot be killed, not by blade nor blow nor poison. Owain ap Cadwgan has the protection of Saint Elen, as long as he keeps her namesake safe from harm and near him always.

For three years, Elen has had plenty of food, clothes to wear, and a bed to sleep in that she shares with the man who brought that warband to her door. Then Owain abducts Nest, the wife of a Norman lord, and her three children, triggering full-out war. As war rages, and her careful lies threaten to unravel, Elen begins to look to Nest and see a different life — if she can decide, once and for all, where her loyalties lie. J. Anderson Coats’s evocative prose immerses the reader in a dark but ultimately affirming tale of power and survival.

J. Anderson Coats is the author of books and short stories for children and young adults. Her first novel, the critically acclaimed The Wicked and the Just, is also a story of medieval Wales. J. Anderson Coats lives and works as a librarian near Seattle, Washington.

An unruly, bloodthirsty band of warriors rampages through 12th-century Wales...this gritty narrative brings a little-known period in history to life...Dramatic and intense; not for the fainthearted.
—Kirkus Reviews

The story (set during 1109–1110) is based on an account in a medieval Welsh chronicle. Its plot involves the ornate politics of small kingdoms and family allegiances, and the impositions and political weight of England’s Norman king. Amidst all the masculine burning and pillaging, Elen’s first-person, present-tense telling...sheds a light on female survival and resistance.
—The Horn Book

The story is bleak, brutal, and unforgiving, narrated by Elen herself, making the experience that much more immediate and personal. Supporting materials include the lineage of Welsh royal houses, a map, and a pronunciation guide for the Welsh words in the story, as well as an historical note.
—Booklist

This intense and dark survival tale takes place in Wales in 1109...The high-level intensity of the plot makes this a better choice for older readers who have an interest in medieval history.
—School Library Connection