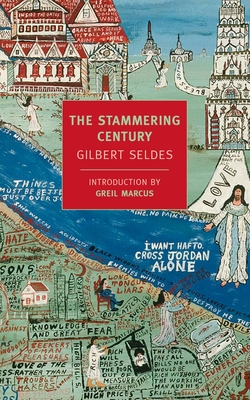 By Gilbert Seldes, Greil Marcus (Introduction by)
$18.95
Email or call for price

Gilbert Seldes, the author of The Stammering Century, writes:

This book is not a record of the major events in Ameri­can history during
the nineteenth century. It is concerned with minor movements, with the
cults and manias of that period. Its personages are fanatics, and radicals,
and mountebanks. Its intention is to connect these secondary movements
and figures with the primary forces of the century, and to supply a
background in American history for the Prohibitionists and the Pente­costalists;
the diet-faddists and the dealers in mail-order Personality; the play censors
and the Fundamen­talists; the free-lovers and eugenists; the cranks and
possibly the saints. Sects, cults, manias, movements, fads, religious
excitements, and the relation of each of these to the others and to the
orderly progress of America are the subject.

The subject is of course as timely at the beginning of the twenty-first century as when the book first appeared in 1928. Seldes’s fascinated and often sympathetic accounts of dreamers, rogues, frauds, sectarians, madmen, and geniuses from Jonathan Edwards to the messianic murderer Matthias have established The Stammering Century not only as a lasting contribution to American history but as a classic in its own right.

Gilbert Seldes (1893–1970), the younger brother of famed foreign correspondent and investigative journalist George Seldes, was an influential American journalist, writer, and cultural critic, noted for championing the popular arts. Born into the Jewish agricultural community of Alliance Colony, New Jersey, to philosophical anarchist parents of Russian Jewish descent, he attended Philadelphia’s prestigious Central High School and graduated from Harvard University, where he became friends with e. e. cummings and John Dos Passos. After working as a newspaper reporter in Philadelphia and Washington, D.C., and as a war correspondent in England during World War I, he joined the staff of The Dial and became the New York correspondent for T. S. Eliot’s The Criterion. In 1923, however, he went to Paris to write a book in praise of popular culture. The result, The Seven Lively Arts, appeared the following year to both considerable acclaim and criticism for its celebration of the likes of Al Jolson over John Barrymore and Charlie Chaplin over Cecil B. DeMille. In Paris, Seldes met and married Alice Wadhams Hall; the couple would have two children, Timothy, a literary agent, and Marian, a Tony Award–winning actor. Seldes later wrote columns for The Saturday Evening Post and Esquire, adapted Lysistrata and A Midsummer Night’s Dream for Broadway, made historical documentary films, wrote radio scripts, and became the first director of television for CBS and the founding dean of the Annenberg School for Communication at the University of Pennsylvania. His other many books of cultural criticism and social analysis include The Years of the Locust (1932), The Movies Come from America (1937), The Great Audience (1950), and The Public Arts (1956). Seldes also published a novel, The Wings of the Eagle (1929), and, under the name Foster Johns, two books of detective stories.

Greil Marcus is the author of The Shape of Things to Come: Prophecy and the American Voice, Lipstick Traces, and other books; with Werner Sollors he is the editor of A New Literary History of America. In recent years he has taught at the University of California at Berkeley, Princeton University, the New School University, and the University of Minnesota. He was born in San Francisco and lives in Oakland.

“One of the most perceptive and entertaining studies of the American spirit in the nineteenth century.”  —Richard Hofstadter

“The quality of The Stammering Century lay in the fact that its author was interested in the history of his country, not to mock the past or to instruct the present, but for its own sake. Because he was a man of intelligence and sympathy, because his judgment was notably sane and because he worked hard in the sources, his book offered a remarkable picture of the rise and decay of the evangelical strain in American reform….The Stammering Century is a work of continuing vitality and interest.” —Arthur Schlesinger, Jr.

“He [the reader] will find plenty in to excite his interest and stimulate his reflective powers. He will be continually wondering what is this thing in the mind of man which makes him love impossibilities, and not only believe in them but act on them. Many of Mr. Seldes’s moonshine captains are rogues and frauds, but many are honest dreamers, and many are men of incoherent power.” —The New York Times

“Mr. Gilbert Seldes has written a book which I for one have found extraordinarily delightful reading. Dealing as he does with all the cranks of the nineteenth century in America, he might easily have fallen into a tone of hard satire, but throughout he preserves a mood of wistful and whimsical regret….The Stammering Century is not only interesting psychologically and pathetic morally; it is also exceeding amusing, since most or the characters dealt with are delightful absurdities. Being myself inclined to crankdom, I have read the book as an awful warning, but those who have no inclination that way should read it humbly, with the realization that many of the most futile of these saints are authentically of the Kingdom of Heaven.” —Bertrand Russell

“[The Stammering Century is] instructive about upstate New York and the weird edges of the reform movements of the 19th century.” —Dana Spiotta, “By The Book,” The New York Times Book Review