Nerd Do Well: A Small Boy's Journey to Becoming a Big Kid (Hardcover) 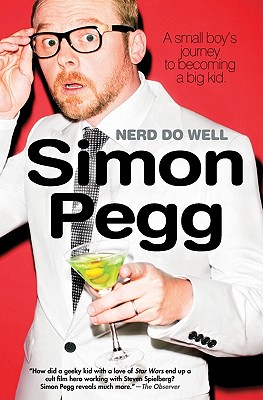 The unique life story of one of the most talented and inventive comedians, star of Shaun of the Dead, Hot Fuzz, and Star Trek.
Zombies in North London, death cults in the West Country, the engineering deck of the Enterprise actor, comedian, writer and self-proclaimed supergeek Simon Pegg has been ploughing some bizarre furrows in recent times. Having landed on the U.S. movie scene in the surprise cult hit Shaun of the Dead, his enduring appeal and rise to movie star with a dedicated following has been mercurial, meteoric, megatronic, but mostly just plain great.
From his childhood (and subsequently adult) obsession with science fiction, his enduring friendship with Nick Frost, and his forays into stand-up comedy which began with his regular Monday morning slot in front of his twelve-year-old classmates, Simon has always had a severe and dangerous case of the funnies.
Whether recounting his experience working as a lifeguard at the city pool, going to Comic-Con for the first time and confessing to Carrie Fisher that he used to kiss her picture every night before he went to sleep, or meeting and working with heroes that include Peter Jackson, Kevin Smith, and Quentin Tarantino, Pegg offers a hilarious look at the journey to becoming an international superstar, dotted with a cast of memorable characters, and you're rooting for him all the way.

Simon Pegg is an actor, comedian, screenwriter, producer, and author. Best known for his roles inShaun of the Dead, Hot Fuzz, Spaced, and Paul, he also played Scotty in Star Trek (2009). Simon lives in London with his wife and daughter."