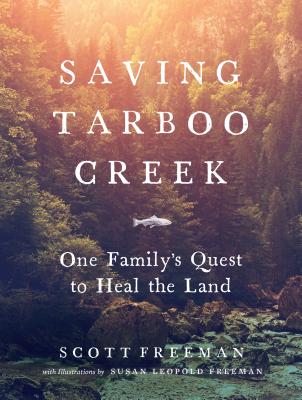 “We all live in particular places and at particular times, but when we act with family and friends to preserve a local slice of nature, we are, together, saving the planet.” —Natural History Magazine

Can each of us, as stewards of our land, make an environmental difference that can be seen, felt, and measured? Scott Freeman emphatically says yes, and in Saving Tarboo Creek he explores how we can all do it by making small changes over time. Saving Tarboo Creek masterfully blends two stories of the Freeman family’s effort to reclaim a small patch of the planet: one, a tale of the realities of rehabilitating a degraded fish run in what was once an old-growth watershed; the other, an account of human resource use over time and what that history means for the future. Based on the land ethics found in Aldo Leopold’s A Sand County Almanac, Saving Tarboo Creek is both a timely tribute to our land and a bold challenge to protect it.

In 2004, the Freemans bought 18 acres along Tarboo Creek, on Washington State’s Olympic Peninsula, and began reforestation and salmon stream restoration work in conjunction with the Northwest Watershed Institute and Jefferson Land Trust. His family now owns and manages over 240 acres of forestland in Jefferson County, all protected by conservation easements held by Jefferson Land Trust.

Susan Leopold Freeman grew up outside West Lafayette, Indiana, and attended DePauw University and the School of the Art Institute of Chicago, where she received a BFA.

In 2004, the Freemans bought 18 acres along Tarboo Creek, on Washington State’s Olympic Peninsula, and began reforestation and salmon stream restoration work in conjunction with the Northwest Watershed Institute and Jefferson Land Trust. His family now owns and manages over 240 acres of forestland in Jefferson County, all protected by conservation easements held by Jefferson Land Trust.

“A moving account of a beautiful project. We need stories of healing in this tough moment; this is a particularly fine one.” —Bill McKibben, author of Radio Free Vermont

“As Aldo Leopold so eloquently expressed, healing the damage done to land can be a family’s labor of love. In keeping with the Leopold legacy, Susan Leopold Freeman and Scott Freeman share with readers their family’s evocative restoration journey. They weave together art and ecology as they reflect deeply on what it means today to live well and ethically on this earth.” —Cristina Eisenberg, chief scientist at Earthwatch Institute, author of The Carnivore Way

“Scott Freeman demonstrates a healer’s touch with his pen, just as his extended family of helpers does with the Tarboo Creek property. But what really stands out here is their willingness to put in the work, over the course of generations, then patiently step back and watch what happens to a planet much in need of special care.” —Jack Nisbet, author of Sources of the River, The Collector, and Ancient Places

“In the spirit of A Sand County Almanac. . . Mr. Freeman alternates between reflections on global ecology and local, lyrical observation. . . . not only an earnest report of reclamation but also a hymn to pleasure.” —The Wall Street Journal

“Freeman explains in clear, nonjudgmental prose what is lost when farmland and forests are cleared for ‘development,’ and the losses are great. . . . Thought-provoking and unsettling, this highly readable book is made lovely by homey drawings sprinkled throughout.” —Booklist

“Saving Tarboo Creek is a call to action that deserves shelf space beside environmental writing from the likes of Bernd Heinrich, Bill McKibben and Edward Abbey.” —Shelf Awareness

“Saving Tarboo Creek is a beautiful mixture of lush description, ecological activism, and lifestyle advice, decorated throughout with watercolors of life at Tarboo Creek. If any book were to woo humanity back to the forest through sheer, earnest charm, it would be this one.” —Foreword

“Readers will find, this story is bigger than a single couple and their pet summer project. . . . Just as Aldo Leopold's book took the hills of Wisconsin as a microcosm of an environment in peril, Freeman casts the effort to revive Tarboo Creek. . . . We all live in particular places and at particular times, this little gem of a book tells its readers, but when we act with family and friends to preserve a local slice of nature, we are, together, saving the planet.” —Natural History Magazine

“These students understand the task that they have been given, at this crossroads in history. And they are determined. This is not despair, or whining or howling. It is the public will, rising.” —The Seattle Times

“Put Saving Tarboo Creek at the top of your summer reading list. In the first place, it’s a gem of a book—comfortably sized and lucidly written. Second, it contains compelling food for thought about the region in which we live. And third, it’s a clarion call for the restoration of habitat, presented in a way that is eloquent, pragmatic and inspirational.” —The Kitsap Sun

“Third and fourth generation Leopolds are putting these invaluable lessons about healthy growth, both personal and environmental, into practice.” —NW Book Lovers