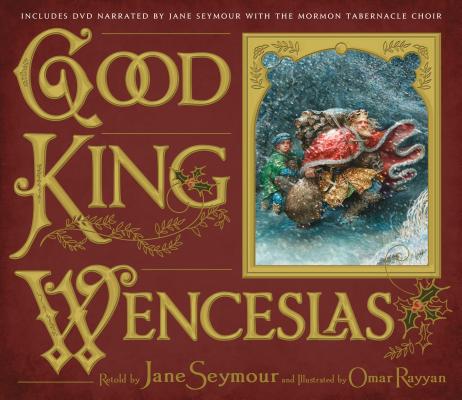 By Jane Seymour (Read by), Omar Rayyan (Illustrator)
$21.99
Email or call for price

One snowy evening, when the rest of the kingdom is reveling in a celebratory feast, a king and his faithful page venture out to deliver food, wood, and comfort to a poor peasant family. "Good King Wenceslas" is the beloved Christmas carol that relates this tender story, and it is brought to life in this book and DVD by actress Jane Seymour and artist Omar Rayyan. The sumptuous illustrations reflect the medieval setting of this tale, capturing the lavish Feast of St. Stephen at the castle and the arduous trek through heavy snow to a humble cottage deep within the forest. The original lyrics to the song, set to music more than 150 years ago, are interwoven throughout the story. The actions of the kind, humble Bohemian king reflect the invitation of another King to follow in His footsteps, bringing the blessings of Christmas to all of His kingdom.

Jane Seymour was born and educated in England. She has been a stage, film, and television actress since she was thirteen years old, earning an Emmy Award and two Golden Globe Awards. She is a recipient of the Officer of the British Empire (OBE), bestowed by Queen Elizabeth II in 2000 for representing England as an actress and philanthropist. She has written several self-help and inspirational books and has coauthored a children's book series with her husband, James Keach. Jane is actively involved in many charitable organizations, including the Open Heart Foundation, which she and her husband began in 2010. With additional accomplishments as an established artist, she has exhibited in galleries across the nation, and she has established her own lifestyle brand inspired by her homes, art, and family-centered lifestyle. Jane resides in Malibu, California, with her husband and children. Omar Rayyan graduated with a bachelor of fine arts degree in illustration from Rhode Island School of Design. He has been illustrating professionally for nearly two decades, and his clients include Holiday House, Cricket Magazine Group, Scholastic, Wizards of the Coast, Random House, HarperCollins, Simon & Schuster, and Hyperion/Disney. He works primarily in watercolor, and he has a special affinity for animals. He has won numerous awards for his work, including to gold awards in Spectrum. He currently resides on the island of Martha's Vineyard with his wife, Sheila.